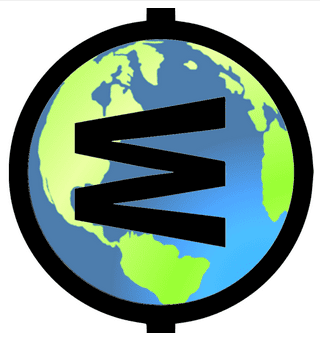 A recent opinion piece in the New York Times targeted historic preservation as an out-of-touch field that negatively impacts communities, as well as a movement that does not support building a more sustainable, environmentally-friendly planet. Alongside the responses of my historic preservation colleagues, I’d like to respectfully disagree with the Times piece, too.

Of the dozens of ways that historic preservation makes communities more vibrant, humane, and sustainable, I’d like to highlight a little understood and little appreciated virtue and value of existing buildings – their embodied energy.

At Adirondack Architectural Heritage we’ve invented a word for this value – Embedawatt.

Let’s Start with the Watt

We’ve all heard of Watts, usually in the form of selecting a light bulb for its wattage. We understand that the higher the wattage, the brighter the light, and the more energy is used in producing that light. 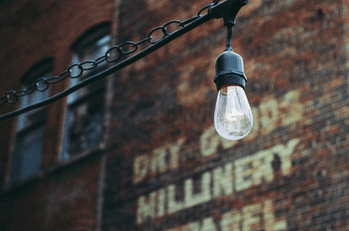 We measure energy usage in a variety of ways. It’s the gallons of gasoline or diesel fuel we use in our cars and trucks. It’s the fuel oil or natural gas we use to heat our homes. And it’s the electricity we use for almost everything else, from appliances, to lighting, to home heating. While electricity is measured in watts and kilowatts, other fuel consumption is measured in BTUs (British Thermal Units) which can be converted into watts for comparison purposes.

Then There’s the Negawatt

In 1985, energy efficiency guru Amory Lovins coined the term Negawatt as a way of describing and measuring the energy NOT used as a result of energy conservation. This was a way of encouraging consumers to conserve energy based on a “Do Less to Use Less” attitude and to make the point that every watt/BTU not used has value too. In this case, the more Negawatts in your energy bank, the better.

If you think about meeting our energy conservation, renewal energy, and carbon reduction goals, it comes down to a couple of things:

Make personal choices to use less energy altogether. This can be done in a variety of ways we all know about: drive less, use a more fuel efficient car, take public transportation; insulate and weatherize your house, upgrade to more efficient and/or non-fossil fuel heating and cooling systems, turn the heat and air conditioning systems down; consume less; eat less meat – all of these savings go in your personal negawatt bank. Hurray, you are an energy saver!

Use more renewable energy and much less carbon-based energy (coal, gas, and oil). We also need to make huge shifts in how we produce energy in the first place and we can’t reach a truly carbon-free energy system fast enough. Besides encouraging governments and energy producers to escalate the pace of this change more quickly, we can also make individual choices to purchase our energy from renewable sources in a variety of ways, including the choice to participate in a Community Shared Solar farm. All this matters.

But there’s something else we should consider when we make choices around energy, from the kind of house we buy or build to a variety of other consumer choices we make every day, and that is to consider the value of embedded or embodied energy. Embodied energy is the energy stored in any existing material – the materials used to make an existing house, car, cans of beer – absolutely everything.

Valuing embodied energy is at the heart of why we recycle. Tossing something away is inherently wasteful, but recycling something is a smart energy choice because, for instance, making an aluminum can from recycled materials takes 95% less energy than to make a can out of raw materials or, even better, avoid cans as much as possible by using a refillable container. In the same way, reusing and rehabilitating an existing building uses less energy than to create a new building because so much of the energy to make the existing building has already been expended.

An Embedawatt represents the value of this embodied energy and this, too, can be calculated for absolutely anything. In the historic preservation field, we make the point that a building is the largest thing you’ll ever get to recycle, and that by reusing or continuing to use an existing building, you are valuing and taking advantage of its embodied energy. If Negawatts represent the value of energy not consumed, then Embedawatts represent the value of energy already spent in materials, which still often have a long and useful life.

In contrast, new buildings require a great deal of new energy, including the energy to:

Plus, when demolition of an existing structure is involved, add to the above the energy costs for the demolition work, including transportation to a landfill, and other disposal costs.

Put this into an average-sized new house and you get about 181,000 kilowatts in energy expenditure just to build the house.

Assuming the new house is more energy efficient than an existing house, it still takes an average of 40 years for an energy efficient new house to recover the energy and carbon expended in the construction of the house (Empty Homes Agency, 2008).

The greenest building just may be the one that already exists. 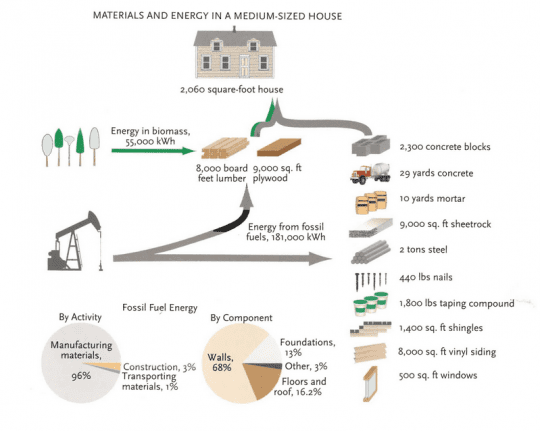 Read more about historic preservation at Adirondack Architectural Heritage’s webpage. A version of this article first appeared on the Adirondack Almanack.

Illustrations: Above, the symbol for the Embedawatt, as envisioned by AARCH staff; and below a Medium Sized House Energy Chart courtesy of Jerry Jenkins (from Climate Change in the Adirondacks).