Britain and the US share a passion for boxing. Over time, it has been both mass entertainment and highbrow delight for writers from Byron to Norman Mailer, or artists from Cruikshanks to Bellows.  In 1949, Kirk Douglas made his name as Midge Kelly in Champion. The greatest sporting event of the nineteenth century was a bout between a London bricklayer and a New York blacksmith. Both were of Irish descent. They became sporting super stars.

The modern history of boxing started with the growing popularity of bare-knuckle fighting. The spectacle of two men beating each other senseless attracted a keen following. Early fighting had no written rules. There were no weight divisions, no round limits, and no rest periods. A boxer was declared the winner when his opponent was no longer able to continue. With the increasing involvement of rich patrons, huge wagers were put down on fights. With such sums of gambling money at stake, the need for rules was repeatedly called for in order to avoid dirty dealings.

Puritanical forces of ‘polite society’ rendered professional fisticuffs illegal. In a time marked by a desire for all things moral and upright, boxing was deemed a pursuit unfit for the education of young gentlemen. Rumours about violence and match fixing gave pugilism a poor reputation. In spite of that, boxing attracted aristocrats and artists alike. In 1819, Robert Cruikshank designed Going to a Fight, a six metres long continuous strip-panorama which depicts a medley of urban types making their way to Moulsey Hurst, the venue of a number of notorious fights on the south bank of the Thames. Artistically, it is Britain’s most remarkable tribute made to boxing.

Between 1812 and 1828 Pierce Egan published Boxiana; or, Sketches of Modern Pugilism with illustrations by George and Robert Cruikshank (the book went through several editions in five expensive volumes). The author charts the “Sweet Science of Bruising,” the progress of bare-knuckle boxing from its emergence in the early eighteenth century to its decline in the 1830s.

Egan included an anthology of pugilistic verse. Lord Byron loved a fight and other poets shared his passion. John Keats, John Clare, John Hamilton Reynolds, and Thomas Moore expressed enthusiasm for the sport. Among William Hazlitt’s written portraits of Bentham, Coleridge, Wordsworth and others, there is a recording (February 1822) of the bout in eighteen bloody rounds between Bill Neate (the ‘Bristol Butcher’) and Tom Hickman. Boxing reached its crowning status at the coronation of George IV on 19 July 1821 when eighteen pugilists guarded the entrance to Westminster Abbey.

Metropolitan life at the time was a Darwinian struggle in which muscle meant survival. Tom Sayers was born in Brighton in a slum area infested with rats and vermin. The miserable living conditions caused frequent epidemics of whooping cough, smallpox, or scarlet fever. The Irish immigrant family then moved to London. A bricklayer by trade, young Tom worked on the London Road Viaduct which was completed in 1846. By this time he had already turned to prize fighting. Sayers gained the heavyweight title of England in 1857, defeating William Perry (the ‘Tipton Slasher’). 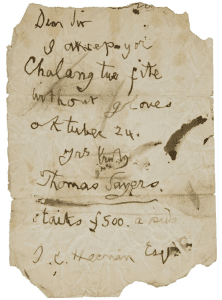 John Camel Heenan was born in what is now Watervliet, New York, but was then known as West Troy. His parents had emigrated from County Tipperary and he joined his father as a blacksmith at Watervliet Arsenal on the Hudson River. He then crossed to Benicia, California, where he earned the nickname ‘Benicia Boy’.

Following the retirement of John Morrissey in 1858, Heenan assumed the title of American champion. In 1859 he issued a challenge to Tom Sayers. A meeting was agreed to and Heenan left New York on board Cunard’s wooden paddle steamer Asia, landing in Liverpool on January 16, 1860.

Although such fights were illegal, the prospect of the bout caught the public imagination on both sides of the Atlantic. News traveled with lightning speed, even without social media. In England, according to The London Times, it “led to an amount of attention being bestowed on the prize ring which it has never received before,” while the Clipper (the New York Clipper was a weekly entertainment newspaper) observed that “fight, fight, fight is the topic that engrosses all attention.” Talk about the event eclipsed the anticipation for the April 23, 1860 National Convention of Democrats in Charleston, South Carolina, where the party split over slavery.

It must have been an extraordinary spectacle to those who, on the early morning of April 17, 1860, witnessed massive crowds making their way to Waterloo Station, all hurrying to the fields of Farnborough, a village in rural Hampshire. Among those present were the young Prince of Wales, various Members of Parliament, Charles Dickens, William Thackeray, and caricaturist Thomas Nast who was sent over by the New York Illustrated News to depict the contest. 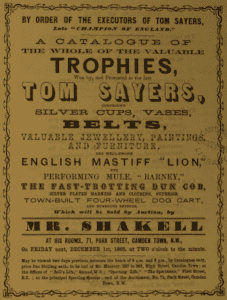 Heenan was younger, taller, and three stone heavier than his opponent, but initially Sayers dominated the fight with blood pouring from his opponent’s face. After more than forty rounds, the latter gained the upper hand. As he seemed to choke Sayers against the top rope, some members of the rowdy audience spilled into the ring. After two hours twenty-seven minutes the police intervened and brought proceedings to a halt. The referee declared the fight a draw and the two men shared the purse.

The bout became the subject of street ballads and prints. Jem Ward, a former prize fighter turned painter, produced a famous image of the occasion.

One who discretely retreated from the scene when the Hampshire police stepped in was the Prime Minister, Lord Palmerston. Questions were asked in the House of Commons and the immediate outcome was a call for stricter regulations. Enter John Sholto Douglas, 9th Marquess of Queensberry. Father of Alfred Douglas (Bosie) and the man who caused Oscar Wilde’s downfall, he was a patron of boxing. A set of ‘Dozen Rules’, drawn up by the London Amateur Athletic Club under his guidance in 1867, were named the ‘Queensberry Rules’.

After the fight, Sayers and Heenan toured the country together, sparring in theatrical re-enactments of their fight. Subsequently, Sayers ran his own circus (and performed for the Royal family at Sandringham) before retiring to Camden Town. He died at the age of thirty-nine. His burial at Highgate Cemetery was said to have been attended by 10,000 people and the funeral itself turned into a brawl with the police unable to control the crowd forcing their way into the graveyard.

For a while, Heenan lived the life of a super star. He had a turbulent affair with actress Adah Isaacs Menken whom he married without her having secured a legal divorce from her first husband. On his return from Britain, he was feted as a champion, touring the country, meeting Abraham Lincoln, and re-enacting the fight for an adoring public.

During the Civil War Heenan traveled back to England, but his affairs turned sour. Menken sued for divorce and he lost what would turn out to be his last fight to Tom King. Returning to New York, his name was quickly forgotten, and relatively few mourners turned out when he was buried in 1873 at Saint Agnes Cemetery in Menands.

The first decades of the twentieth century were the golden age of boxing. During that era there was an upsurge in representations of the sport in avant-garde painting and literature (Hemingway tried teaching Ezra Pound to box during his years in Paris). The Heenan versus Sayers fight figures in James Joyce’s Ulysses. Boxing was a modernist spectacle.

Irish fighters had dominated British boxing throughout the second half of the nineteenth century. They were somewhat replaced by immigrant Jews for whom boxing became a means of confirming their ethnicity and identity. Pugilism was associated with maligned minorities, offering an escape route from poverty and discrimination. Between 1880 and 1920, however, the center of gravity shifted from London to New York. While literature of this period is full of boxing allusions, it was the new American painting that best captured the brute essence of the sport.

George Bellows was a student of Robert Henri at the New York School of Art. When he died in 1925, aged forty-two, Bellows was hailed as one of the greatest artists America had yet produced. His New York street scenes are iconic images of urban deprivation. He chronicled a variety of subjects in an array of techniques, but his signature contributions are those paintings that record boxing bouts.

In three masterpieces, Club Night (1907), Stag at Sharkey’s (1909), and Both Members of this Club (1909), the artist’s slashing brushwork matches the violent action in the ring and relates the participation of a grim-faced, chain-smoking audience. These pictures are both powerful and disturbing – raw reflections of the metropolitan grind that once produced fighters such as Sayers and Heenan.

Illustrations, from above: Jem Ward’s picture of the bout of the century; Kirk Douglas in Champion (1949); Sayer’s reply (1859) to Heenan’s challenge; and sale catalogue for Sayer’s trophies, auctioned on 1 December 1865 in Camden Town, London. A copy of the  survives in the collections of Cambridge University Library.