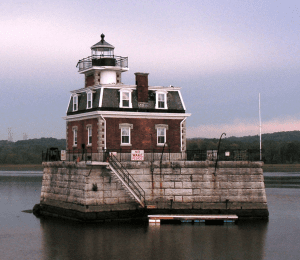 Since 1999, the Preservation League of New York State has highlighted the state’s threatened historic sites through the Seven to Save list, which provides enhanced services from the League to bolster visibility and build support for preservation. Through partnerships with groups and individuals, threats to dozens of at-risk buildings, landscapes, downtowns, and neighborhoods have been reduced, and in many cases, eliminated by the Preservation League’s listing and subsequent actions.

The NYS Barge Canal System spans 524 miles and includes the Erie, Champlain, Oswego, and Cayuga-Seneca Canals. It is an authentic end-to-end transportation corridor that has continuously operated since its construction, connecting residents and visitors throughout New York State. Due to this rich history, the NYS Canal System is listed as a National Historic Landmark District, this country’s highest level of historic designation. As the Erie Canal celebrates its bicentennial, New York State embarked on an initiative to Reimagine the Canals. As part of this initiative, a recently released report recommends changes to the Erie Canal section of the NYS Canal System, without fully recognizing the system’s strengths and historic integrity. We believe that the best future for our NYS Canal System lies in capitalizing on its authenticity as the oldest, continuously operating canal system in the nation. The League seeks to work with all stakeholders to welcome additional new uses for the NYS Canal System, while improving amenities for canal travelers and strengthening local, regional, and international partnerships to promote recreational and commercial uses. This Seven to Save designation highlights the need for New York State to prioritize stewardship of the NYS Canal System as an intact, fully navigable international waterway for present and future generations.

The National Register-listed Hudson-Athens Lighthouse was constructed in 1874 and is one of only seven remaining Hudson River lighthouses (of the original 14). While the US Coast Guard maintains the light, the nonprofit Hudson-Athens Lighthouse Preservation Society stewards and maintains the structure. Many think the Coast Guard has building maintenance responsibility beyond the light, presenting fundraising challenges for the nonprofit, which has completed some building stabilization projects. After almost 150 years of providing direction, the lighthouse suffers from deterioration and its caretakers need additional visibility to spotlight its importance and unique preservation challenges. This Seven to Save designation will bring increased attention, awareness, and assistance to the lighthouse, so that the Lighthouse Preservation Society can preserve the building for years to come.

Richard Lippold’s monumental Orpheus and Apollo hanging interior para-architectural installation was removed from Avery Fisher/David Geffen Hall in 2014. Initially, Lincoln Center claimed this was a temporary circumstance due to the safety of the public and the art, but Lippold’s work would return following forthcoming renovations. Since that time, Lincoln Center announced sweeping changes to the Hall which currently do not include reinstallation. Orpheus and Apollo was the first major piece created specifically for Lincoln Center and a key commission for Richard Lippold, an internationally-renowned artist known for his site-specific work. Lincoln Center’s National Register Eligibility determination noted “the complex is … a collection of buildings, interiors, landscapes and art that is unparalleled as an experience of the variety of American postwar design in a single location.” Orpheus and Apollo remains in storage and could be repatriated with its’ architecture, as part of a renewed Avery Fisher/David Geffen Hall. This Seven to Save designation will call attention to the importance of Orpheus and Apollo as not only publicly accessible art, but also a key feature of the Philharmonic Hall itself.

Central High School (now known as Central Tech) was designed by architect Archimedes Russell and constructed in downtown Syracuse between 1900 and 1903. Historically, the building was used as a public school and its 2000-seat Lincoln Auditorium was the original home of the Syracuse Symphony. The building was sold for redevelopment in the 1980s, but after the proposed venture failed it returned to the city and has sat vacant ever since. City officials, legislators, and local stakeholders now propose to rehabilitate the former high school building into a STEAM-focused school that will attract students from both the surrounding neighborhood and other areas in the region. This Seven to Save designation will bring enhanced visibility, support, and advocacy assistance as city officials seek to rehabilitate the structure.

National Register-listed Parrott Hall was constructed in the 1850s as the home of Nehemiah Denton. In 1882, New York State bought the house and converted it into the first NYS Agricultural Experiment Station. The NYS Office of Parks, Recreation and Historic Preservation acquired the building in 1974 to create a state historic site celebrating our state’s agricultural legacy. After decades of vacancy, Parrott Hall has areas of deterioration and needs capital investment, while it remains in remarkably good condition. In early 2018, the Preservation League joined with local and regional partners to form the Parrott Hall Coalition, which includes the Landmark Society of Western New York, Friends of Parrott Hall, City of Geneva, to advocate and fundraise for this important building. This Seven to Save designation will call attention to the building’s statewide significance as a key part of New York’s agricultural heritage.

In 2011, construction workers in Elmhurst working in a vacant lot discovered the over 100-year-old grave of a woman in an iron coffin. Research revealed her identity and the existence of many unmarked graves of citizens of Newtown, a community of freed African Americans established in 1828. Development now threatens to erase this history altogether, and the Elmhurst History & Cemeteries Preservation Society is working with others to halt this. This Seven to Save designation will help promote Newtown’s forgotten history and bring attention to the many unmarked African American burial grounds throughout New York State, highlighting the conversation around these important parts of our history.

Sag Harbor Hills, Azurest, and Ninevah Subdivisions (SANS) developed in the mid-20th century as African American vacation communities. The modest, midcentury homes captured the spirit of the American Dream and provided the backdrop for a thriving community knitted together by strong social bonds – famous residents included poet Langston Hughes and actress Lena Horne. As SANS families continue to age and move away, developers seeking prime waterfront property are replacing existing homes with luxury residences. A strong group of local advocates is spearheading preservation efforts because despite its National Register status, SANS lacks strong local protection or zoning. This Seven to Save designation will enhance the advocacy work already begun and catalyze protection for this culturally significant area.

More information about these historic sites and the Seven to Save program can be found online.

More information on the Preservation League of New York is available on their website.