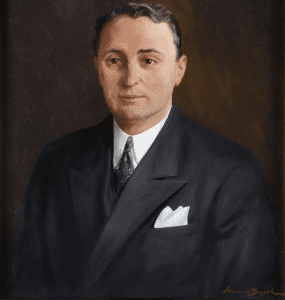 Royal Academy of Belgium artist Edward P. Buyck de Morkhoven, known for his portraits of Franklin Delano Roosevelt and other prominent politicians, lived in upstate New York for much of his adult life.

Buyck, also was known for his painting of race horses, landscapes and historical settings. At the time of his death in 1960, his painting of an old-time Albany scene at the corner of State and Pearl streets, still hung at the Munger-DeWitt Clinton Hotel in Albany.

Buyck came to the United States during World War I after he was wounded fighting with the Belgium forces. He became a naturalized United States citizen in 1918 while serving with the U.S. Army at Camp Mead and at Watervliet Arsenal.

While living at Glens Falls, in Warren County, after World War I, his painting “A Field in Flanders” was placed in the Museum de Luxembourg at Paris, France.

He then operated the 1,160-acre Black Mountain Fox Ranch at North River, in Northern Warren County. Raising silver foxes in the Adirondacks afforded him time and inspiration for his art. 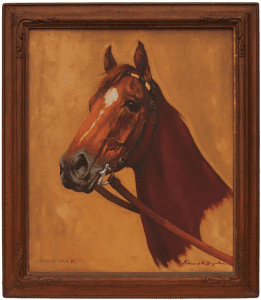 “He is a great lover of nature and animals and takes personal care of the foxes at his ranch,” J.E. Smith, secretary of the National Fox Breeders Association, wrote of Buyck in 1921. “He says he treats the foxes as human beings and that the results are very satisfactory.”

In 1920, Buyck married Mary Willard Vine, a landscape artist and interior designer. The couple lived for much of the rest of his life at Slingerlands, near Albany.

In 1920, Buyck supplied the ornamental plaster work at the new Herkimer Theater at Herkimer.

In 1930, he designed the historical markers and was a member of the committee that researched the War of 1812 route from Big Sandy Creek to Sackett’s Harbor of the frigate Superior’s great rope cable.

Illustrations: Above, Edward Pierre Buyck (Belgium, 1888-1960, studied art in Bruges, Antwerp, and Paris) portrait of Charles Poletti (1903–2002), a justice of the New York Supreme Court, then Lieutenant Governor and the first Italian-American Governor in the United States. Below, Buyck’s portrait of one of America’s most famous racehorses, Man O’ War (foaled March 26, 1917).