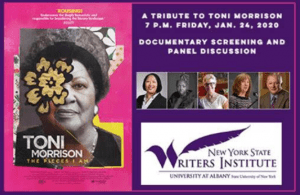 The NYS Writers Institute is set to hosts A Tribute to Toni Morrison on Friday, January 24, at 7 pm, at Page Hall on the UAlbany downtown campus, 135 Western Avenue, Albany.

The event will include a screening of the 2019 documentary The Pieces I Am and a panel discussion about her life and legacy.

Paul Grondahl, director of the NYS Writers Institute, will moderate the discussion following the documentary screening.

The Nobel Prize-winning author died at age 88 on August 5, 2019, in New York City. In the 1980s, she shared office space and collaborated frequently with Writers Institute founder William Kennedy. Morrison addressed a packed audience at UAlbany in 1984, just the second featured writer in the Institute’s history. She also wrote parts of Beloved, one of the most acclaimed novels in all of American literature, while at UAlbany, and the news of her Pulitzer Prize in 1988 came with a phone call to the Institute’s office.

The event is free and open to the public. For more information, or to watch “The Pieces I Am” trailer, visit the Writers Institute’s website.