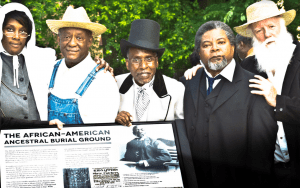 The Albany Institute of History & Art is set to host a special program in honor of Black History Month entitled “Teaching Black History through Theater,” on Saturday, February 1st, at 2 pm.

A performance by the gospel choir from First Israel AME Church (Albany) will be featured during this program, as well as a dance performance by Estreja Turner. Light refreshments will be available for attendees.

Event organizer Donald Hyman is passionate about history and excited for the opportunity to talk about the work and rewards that come with historic re-enacting:

The program is included with museum admission. Space is limited. Doors will open at 1:30 pm. Attendees are asked to get a wristband from the Admissions Desk. Wristbands are available on a first-come, first-served basis the day of the event.

More about the presenters:

Donald “the Soul Man” Hyman is a Brooklynite who now calls Albany home. He has portrayed Frederick Douglass, Booker T. Washington, and Dr. Martin Luther King, Jr. He will be portraying Judge James C. Matthews. He is currently Vice- Chairman for Channel Albany and has produced “Albany Tempo Spectrum” for 8 seasons. He currently works at Montessori Magnet School in Albany. He taught in the American Studies Department at the College of St. Rose.

Walter Simpkins is the Executive Director of Community Fathers Incorporated. He holds a BA from the City College of New York and his credentials also include a Masters degree from the State University at Albany in Africana Studies. Walter Simpkins will portray Moses Viney, a runaway slave who found refuge at Union College in Schenectady. Viney fled a plantation on Maryland’s Eastern Shore in 1840 at 23 when he learned he was about to be sold. Simpkins has portrayed Moses Viney annually at the opening of the Hamilton Hills Arts Center Juneteenth Celebration at Vale Cemetery.

Penny Meacham is a poetess/actress. She will playing the role of Sojourner Truth. She has portrayed Zora Neale Hurston, Billie Holiday, Maya Angelou and Ella Baker. She is a writer and has numerous self published poetry books including Hudson Holla and The Aretha Factor. Meacham is the creator and artistic director of Black Diamond Group Performance Ensemble.

Although born and raised in the Bronx, Clifford Oliver has spent his entire adult life photographing in rural New York. As a veteran staff photographer with New York State’s Office of Parks, Recreation and Historic Preservation Clifford was introduced to historic re-enactors. Aside from being beautiful subjects to photograph, Clifford loved the way re-enactors taught history and it didn’t take long for Clifford to be recruited as an re-enactor. Living in Washington County, it stands to reason that Solomon Northup would be the first personage Clifford Mealy took on some twenty years ago. Since then, Jack of the Mabee Farm, Old Tom at Knickerbocker Mansion, Prince at Schulyer Mansion are some of the forgotten inhabitants of our past that Clifford has resurrected.

Estreja Turner is 16 years old and resides in Latham, NY. Estreja has been active in the art of dance since she was 3 years old. Her love of dance began in the church as a liturgical dancer. At the age of five, she enrolled in the Art In Motion Dance Academy in Albany, NY where she takes ballet, modern, contemporary, jazz, technique, hip-hop, tap, and musical theatre. Estreja is a part of the competition dance team for Art In Motion. Estreja has also participated and performed in many other areas of dance which include but not limited to Troy Music Hall, The Empire State Youth Ensemble a program of NACRE, The Nutcracker Ballet with the Saratoga City Ballet, The Coalition of Black Trade Unionist National Convention, and the Black History Month program at the Opalka Gallery. Estreja will be pursuing her dancing career in college as a part of a dual major; she is also pursuing a degree in Special Education.

The Albany Institute of History & Art is located at 125 Washington Avenue in Albany. Free parking is available in the museum’s lot at the corner of Elk and Dove Streets.

Admission rates are $10 for adults, $8 for seniors (62+) and students with ID, $6 for children aged 6-12, and free for children under 6. Albany Institute members are admitted for free.

Photo of Walter Simpkins (top hat) and Donald Hyman (to the right of Simpkins), provided.