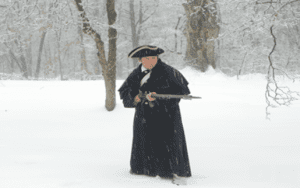 In the fall of 1782, near New Windsor, 7,500 Continental Army soldiers built a city of 600 log huts. Along with some of their family members, they braved the winter and kept a wary eye on the 12,000 British troops in New York City, just 60 miles away.

Discontent filled the encampment at New Windsor during the winter of 1782-83 as the men bitterly reflected upon their ill-treatment by an ungrateful nation. Heavily armed and angry, the disgruntled officers and soldiers of the Continental Army were the biggest threat to the future of the country.

Cannon and musket firing demonstrations will be held at 11 am, 1:30 pm, and 3:30 pm on both days. Following these firings, children enlist in the Continental Army, drill with wooden muskets and get paid in Continental currency for their service.

New Windsor Cantonment State Historic Site is co-located with the National Purple Heart Hall of Honor on Route 300, 374 Temple Hill Road, in New Windsor, just three miles south of the intersection of I-87 and I-84. For more information call (845) 561-1765 ext. 22.

Nearby, Washington’s Headquarters State Historic Site, at 84 Liberty Street, in Newburgh, has a full schedule of activities for the Presidents’ weekend. For more information call (845) 562-1195. Knox’s Headquarters, at 289 Forge Hill Road, in Vails Gate, is open Sunday February 16 from 10 am to 4 pm.