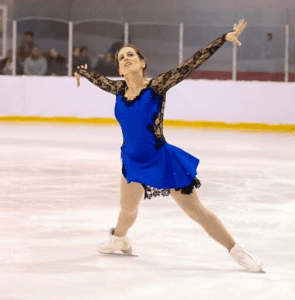 Figure skating has changed tremendously in the last 100 years: many of the dramatic jumps, spins and acrobatics of the 21st century were unheard of a century ago, and the clothing, skates, and ice surface of the Gilded Age created a very different sport than the modern one we know.

Combining two areas of expertise, Staatsburgh State Historic Site’s curator, Maria Reynolds, who is also a competitive figure skater, will explore the popularity of skating during the Gilded Age on January 18, 2020, at 1 pm. Staatsburgh’s former resident, Ruth Mills, was an avid skater, and this talk will also explore some of the moves that she performed.

Dr. Reynolds researched some of the moves performed by women at the turn of the century, including by Ruth Mills, and then recreated them on ice. Her talk will include video of her reenacting these maneuvers. Reynolds has been skating since she was a child and she continues to compete as well as coach skating. “Staatsburgh is a perfect place to talk about skating because the newspapers lauded the quality of Ruth Mills’ skating and the estate workers used to skate here on the Hudson River,” states Reynolds.

The event will feature scones, tea sandwiches and the site’s “Staatsburgh” tea, blended by renowned tea purveyors, Harney & Sons. The cost for the tea is $35 per person or $30 per person for Friends of Mills at Staatsburgh members. Reservations are required and can be made by calling (845) 889-8851.

Tea attendees will also have the opportunity to participate in a brief skating trivia quiz for a chance to win two skating passes to the McCann Ice Arena in Poughkeepsie.

Each winter, Staatsburgh presents its “Gilded Age Tea & Talk” series in the winter months, serving its custom blend of tea created by Harney & Sons, called “Staatsburgh Blend,” along with scones, tea sandwiches and sweets, in the mansion’s elegant formal dining room. Each tea program offers a short talk on a topic of Gilded Age history, given by staff or guest speakers.

While several programs in this winter series are sold out, there are still seats available in three programs. Those interested can call the site during business hours at (845) 889-8851, or visit Staatsburgh’s Facebook events page: www.facebook.com/StaatsburghSHS

Staatsburgh State Historic Site and the Ogden Mills & Ruth Livingston Mills Memorial State Park are located on Old Post Road in Staatsburg, off Route 9 between Rhinebeck and Hyde Park. The historic site is one of 6 sites and 15 parks administered by the Taconic Region of New York State Office of Parks,