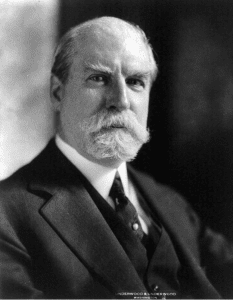 A year ahead of the 1920 presidential election former New York Gov. Charles Evans Hughes was considered a likely shoo-in for the Republican nomination, after narrowly losing the last election.

Hughes was New York governor from 1907 to fall 1910, when he resigned to accept nomination as a U.S. Supreme Court associate justice.

He stepped down from the court in June 1916 to accept the Republican presidential nomination, although he was not a declared candidate, and lost to Democratic incumbent Woodrow Wilson.

A second run in 1920 would not materialize, however, despite repeated attempts to draft Hughes as a “dark horse” candidate.

“Five hundred lithographs of Mr. Hughes have been shipped to Chicago to be displayed about the corridors of the hotels and other gathering places for delegates,” The Evening World of New York City reported June 5, 1920, three days before the opening of the Republican National Convention. “These lithographs … are not to be displayed until the ‘dark horse’ period of the convention is at hand. Then the likeness of Mr. Hughes will decorate every available wall and pillar.”

Hughes seemed like a logical choice in 1920. He had stayed involved in Republican politics after 1916, serving as president of the influential Union League Club, a prominent GOP organization in New York City.

Hughes boosted his bipartisan credentials by, at Wilson’s request, leading a federal investigation of corruption amongst defense sub-contractors and heading a federal committee to develop a strategy to promote federal veteran’s life insurance policies.

Hughes took himself out of the running early in 1920, however, in the weeks leading up to the death of his 28-year-old daughter, Helen, of tuberculosis on April 18.

“I certainly appreciate your personal interest and friendly sentiment you express,” Hughes wrote. “I am utterly unwilling, however, to undertake a second candidacy. … I must therefore ask you not to bring my name forward.”

Still, many Republican politicians and newspaper editors continued to urge Hughes to run, right up through the convention.

“Now nominate Charles Evans Hughes and put a quietus on the old guard or relegate them to the limbo of forgetfulness where all useless things should be placed,” St. Lawrence County temperance advocate William H. Summers wrote in a letter published March 19, 1920 in The Potsdam Herald-Recorder.

In May, Hughes placed second in a Syracuse Post-Standard mail poll, ahead of humanitarian leader Herbert Hoover and U.S. Sen. Hiram Johnson of California.

Gen. Leonard Wood of New Hampshire, another early front runner, won the poll that had responses from 14,000 households across 15 counties.

“Among our ablest men could there be a better choice than Charles Evans Hughes?” the parson asked. “Everybody familiar with his career knows him to be immensely capable, endowed with administrative qualities of the highest order, patriotic … a spokesman whom the nation can always be proud of.”

Conservative syndicated newspaper columnist David Lawrence said Hughes should not be ruled out as a candidate because he might accept the nomination without seeking it, just as he did in 1916.

“Logic will select the next Republican nominee for the presidency and will reject all aspirants except Charles Evans Hughes, William Howard Taft, Herbert Hoover, Leonard Wood, Governor (William) Sproul of Pennsyvania, and Governor (Frank) Lowden of Illinois,” he wrote.

Lawrence said these six would work toward ratification of the Treaty of Versailles. Ohio Sen. Warren Harding, not on Lawrence’s list, was the nominee.

Speculation about Hughes was rampant during the convention.

“The name of Charles Evans Hughes, as a dark horse, was heard frequently, reported the Geneva Daily Times of Geneva, NY.

“Shadows of dark horses continued to stalk through the convention, with supporters of Charles Evans Hughes, Gov. Sproul, and Dr. (Nicholas Murray) Butler particularly active in pussy-footing around for indications of a drift their way,” reported The Alaska Daily Empire.

“One report had it that a group of men who hold important places in the party councils have caucused in preparation for putting Judge Hughes forward at the right time,” reported the Richmond Palladium and Sun-Telegram of Indiana.

“Again the name of Charles Evans Hughes recurred in these discussions, and Gov. (Calvin) Coolidge of Massachusetts was also mentioned,” reported the Evening Caledonian of St. Johnsbury, Vt. U.S. Sen. Borah, R-Idaho, a surrogate for Johnson, told The Madison Daily Leader of South Dakota that he would be willing to consider Hughes as a second choice if Hughes would accept an anti-League of Nations platform.

This scenario would seem unlikely, as Hughes had advocated for ratifying the Treaty of Versailles with reservations.

Although he did not seek the nomination, Hughes was active in the 1920 campaign. When Harding was nominated, Hughes telegraphed the Ohio Senator, “Heartfelt congratulations upon your nomination.” Hughes advised Harding during the campaign, and campaigned on his behalf.