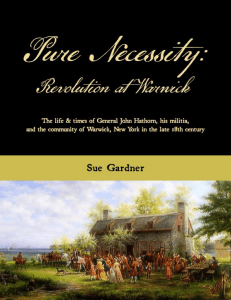 Sue Gardner’s new book Pure Necessity: Revolution at Warwick: The life and times of General John Hathorn, his militia, and the community of Warwick, New York in the late 18th Century (2019) is the story of the Revolutionary War as experienced by the citizens of the Town of Warwick in the mid-Hudson Valley, New York.

Using diaries, pension testimony, newspaper accounts, and other primary source material, the unfolding drama of a small community caught up in the fight for survival and freedom during long years of hardship and conflict is revealed.

Focusing on the career of Gen. John Hathorn, leader of the Fourth Orange County Militia, and the experiences of his men at the strategic locations of the Hudson and Delaware Rivers, the book draws upon eyewitness material. It shows the astonishing role of the militia men in the region as Gen. Washington struggled to pull together an effective fighting force. Warwick men participated in all the region’s major battles, including the Battle for New York, the Battle of White Plains, the taking of Trenton, and even such far-flung operations as the Invasion of Canada.

The social life of the town is also examined. Despite being at a distance from the battles, the community struggled with conflicting loyalties, spy plots, murderous attacks, shortages of food and other essential goods, a continual need for vigilance, tensions between Continental Army officials and the militia men, and all the trauma and disorder of the war. The tragic Battle of Minisink in 1779 against Mohawk leader Joseph Brant was led by Gen. Hathorn and left an unfading mark upon the community.

Also discussed is the role of women; the diversity of the community including the enslaved African population; the intertwining relationships between families that often included those on both sides of the war, and stories carried forward that connect to specific homes and locations.

The book moves forward into the postwar years, as those that survived it took up the task of beginning a new nation. Gen. Hathorn’s rising political star brought him to a seat on the first Congress of the United States, and a close familiarity with all the founding fathers.

The veterans, who often had lost all, stubbornly persisted and many lived into the 1830s when pensions for militia men were approved; they were able to at last request some recognition and compensation from their country.

A substantial part of the book is primary source material linked in a narrative, with numerous illustrations in a format that is accessible and easily browsed. Included is an appendix with extracted information from the pension testimony of more than eighty local men.

Sue Gardner is the Town of Warwick Deputy Historian and local history librarian at Albert Wisner Public Library. A founding member of the Friends of Hathorn House historical society, she has been researching the Revolutionary generation in Warwick for more than two decades.