Underneath Elsie is a sign stating that the Hamlet of Wallkill was the location the “Home Farm” of John G. Borden. Thus, many commonly believe that Borden Condensed Milk was in fact invented in the Hamlet of Wallkill; however, its origins can be traced to Burrville, Connecticut and Gail Borden, Jr. Actually, the business was not originally called Borden at all – that title would come later. 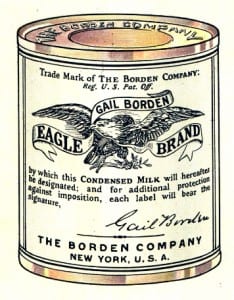 Gail was born in Norwich, Connecticut on November 9, 1801. He spent his entire life hoping to better the lives of Americans at a time when their diets were greatly limited due to a lack of refrigeration. When he moved to Texas in 1829, his primary goal was to find a way to improve people’s livelihoods by keeping food, especially milk, from spoiling.

The company’s website relates that the impetus behind Borden, Jr.’s ideas involved a trip overseas. During the 1850s, Borden, Jr. was in Europe where he demonstrated that the meat pies he invented did not spoil. The meat pies, according to his patent, were dehydrated in a way to prevent them from going bad. In 1852, Scientific American reported that the meat pies were successful in Europe, as the Royal Navy periodically had problems with meat turning sour.

During his return from Europe, Borden, Jr. encountered something which changed his life…and would eventually affect the world. While on a boat crossing the Atlantic Ocean, he had the misfortune of witnessing several children perish. The cause of their deaths was all too common – they drank milk which had become contaminated over time. He became determined to find a way to keep milk fresh in order to prevent anyone, let alone children, from dying. 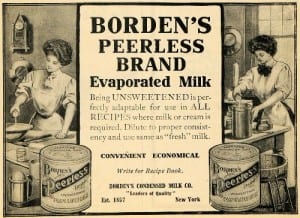 Borden, Jr. capitalized on his future creation when he came upon a contraption called vacuum pans by the Shakers. These were used to generate preserves from harvested fruit. Borden felt that he could utilize a variation of this technique to make milk safer. according to a company historian: “He discovered he could prevent milk from souring by evaporating it over a slow heat in the vacuum. Borden [Jr.] reasoned that milk was 97% water so if the water could be evaporated, at high temperatures, then the milk could be made safe. He called his revolutionary product condensed milk.” This method of heating milk killed microorganisms which, in turn, prevented spoilage. On July 2, 1853, Scientific American proclaimed:

For domestic use it will be the means of saving much in families, especially in warm weather, and at no time need there be any necessity for a person taking a cup of milkless coffee, even after a thunder storm, or a week of hot weather, with the thermometer daily at 97º in the shade, as it has been in this city [New York City] during the past week.

After receiving a patent, Borden, Jr. decided to open a small plant in Wolcottville, Connecticut. Unfortunately, his innovation was anything but successful – it seemed that it would not catch on with the public. Although Borden, Jr. appeared to be a genius at inventing, he was not adept at marketing.

Borden, Jr. again relocated, this time to Burrville, Connecticut. According to the company’s history, he named the new location of his business: “Gail Borden, Jr., and Company.” This business venture was also a failure and Borden, Jr. was running out of money fast. The Texas Historical Society biography of Borden, Jr. relates that the reason for his mounting debt was also due to the unpopularity of his meat pie (outside of Europe). His fortune would change, however, after meeting with his future partner, Jeremiah Milbank. Milbank had the capital required, as well as experience in the food industry, to market condensed milk properly.

According to Gail Borden: Dairyman to a Nation, Borden met Milbank, who was a wholesale grocer, banker, and railroad financier, in 1858. During that same year, the two men formed a partnership and ultimately opened up a factory that proved successful. They decided to change the name of the business from “Gail Borden, Jr., and Company” to “The New York Condensed Milk Company.” By this time, Borden, Jr. was living in New York City. The collaboration between the two men could not have been better timed, as needs which arose from the Civil War greatly benefited The New York Condensed Milk Company. While working on marketing his inventions, Gail Borden, Jr., also started a family.

Borden, Jr. was married three times and with these wives produced seven children, one of which was John Gail Borden born in 1844. This son would follow his father’s path in the condensed milk business. In an effort to enhance the business, Borden enrolled in Eastman College in Poughkeepsie. He wanted to obtain a business degree in order to manage his family’s company. However, these plans were interrupted by the Civil War. 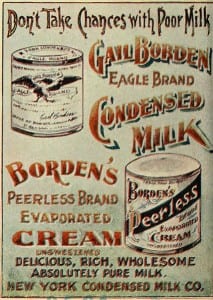 When the war began, Borden was almost 18 years old. He enlisted in the 150th New York Volunteers in Poughkeepsie, where he was attending college. His father’s condensed milk business caught the eye of the U.S. Army; as a result, they contracted-out his family’s milk to be provisioned to the Union Army.

Army life was difficult on Borden and he thus succumbed to a serious illness. This sickness, which is not known, weakened him for the rest of his life and eventually led to an early death from “dropsy.” Prior to this affliction in 1863, and while in the Union Army, he had risen to the rank of Second Lieutenant. He then “was transferred to the 47th N. Y. Volunteers, and remained with that regiment until the close of the war.”

One local story circulating in Wallkill, which cannot be substantiated, involved Borden being wounded on the battlefield. An African-American soldier came to his rescue and saved his life. The same anonymous source, which is closely linked to the Borden’s mansion and its history, related that Borden never forgot this kindness. He spent part of his life looking for this individual. Once Borden located the man, he took care of him and his family for the remainder of their years.

After the war, Borden returned to Brewster, New York in Putnam County where Borden, Jr. had built a condensery in 1864. According to information from The Southeastern Museum in Brewster, it “stood by the East Branch of the Croton River where Route 6 and Route 22 meet today.” This factory met its demise, according to the museum’s records, when New York City flooded prime dairy farm lands for the Croton Reservoir System at the turn of the century.

Borden, Jr. died in 1874 and left his business to his John G., who would become its second president. As early as 1866, Borden wanted to “establish a farm, and a model community near a large city.” It made sense to him, then, that the location of the family business needed to remain close to New York City. After all, a large part of the Borden’s eventual fortune originated there due to a great demand for fresh food and milk.

After searching for some time for an ideal location for these products to be produced, Borden finally settled on an area known as “the Basin” in the Town of Shawangunk in 1881. The Basin occupied the region where the present-day Hamlet of Wallkill is located. He purchased what was then known as “the Andrews farm and about 200 acres of prime farmland.” Borden and his family, which by this time, included his wife Ellen and three children Marion, Lewis, Gail, and Penelope (known as Nellie), chose this location partly because it was near railroad, water routes, but its beauty.

Borden continued purchasing large parcels of land. By 1890, he owned thousands of acres of premier real estate. He named his property in Wallkill “Home Farm.” The town, which was a short distance away, became his project as he went about “improving the lands and lives in the village.” Borden created in Wallkill what he viewed as a paradise. Frank Mentz, in his Recollections of an Old Timer, recalled that he not only built “new roads and lined them all with maple trees; he also lined the public roads that ran through Home Farm.”

In fact, Mentz attributed the hamlet’s entire evolution to the Borden Family. They quite literally created a town parcel by parcel. Mentz remembered that they “had the entire land east of the railroad laid out in building lots with wide streets, such as Lavoletta Street, which is a double street.” Borden also hoped to create “a cemetery on Bona Ventura and First Street,” but it never seemed to have materialized. This would have been near the present-day police station.

Additionally, Borden gave the building where the firehouse currently stands to Wallkill, which he envisioned being a bank, and also donated a town square. Borden also foresaw a part of Wallkill to be commercial in nature. In his recollections, Mentz believed this area to be where Fair Rite Corporation is today. 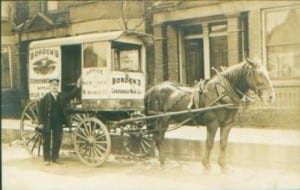 Even on Home Farm, writes Alfred Smiley, Borden built “houses for farm labor, many barns and silos, and two water-powered grist mills…Orchards and vineyards, rolling grain fields and pastures.” Borden also extended his vision of park-like surroundings to the people who worked and lived around Home Farm. He included two parks there that still exist in Wallkill today.

It would have made sense to call today’s Hamlet of Wallkill the Hamlet of Borden or Bordentown because the Borden family came to own just about everything in Wallkill (or their fortune helped build it). In addition, Borden’s generosity was well-known there, especially to children. In Russell Headley’s History of Orange County, “every Decoration Day he presented to every child in the public schools in his vicinity, a small American flag; continuing this practice until his death.” Mentz recalled that the flag was accompanied by “a small bag of 25 new pennies.”

When John G. Borden died in October of 1891, he was vacationing in Florida. It was where he retreated in the cold months because of his poor health. His body was returned to his beloved Home Farm where he was buried, according to tradition, in a spot that he chose. Borden did not see his ultimate dream realized, for when he died he was still far from the completion of his paradise. His work would be continued by his daughter, Marion, and his widow. His daughter became the president of the company and continued her father’s legacy until her own death. It was under her direction that the company changed its name in 1899 to the Borden Dairy.

When traveling the streets of Wallkill, you are reminded of the legacy of the Borden Family. Their hand in shaping the hamlet is still seen and felt. In fact, Borden’s “grid” for the growth of Wallkill is still followed, for the most part, today. Only recently, according to local newspapers, has the hamlet started to outgrow the original town square devised by Borden.