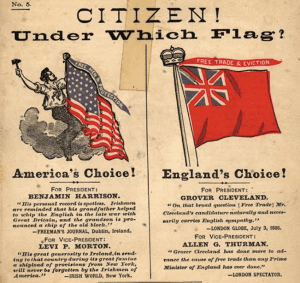 It has long been the conventional wisdom that the Irish in America trend Democratic in their voting tendencies. This was more true in the late 19th Century and in the 1880s, Republican Party election committees were hell-bent on mitigating that trend.

The large Irish population, concentrated as it was in several northeastern cities, made it relatively easy for political parties to ‘segment the market’ and target voters. New York State, with its 36 electoral college votes, was seen as the make-or-break state – a strategic objective for campaign planners.

By the campaign of 1880 senior Irish American Republicans were determined to facilitate an ‘Irish bolt’ from the Democratic party. In New York State, Republican party operatives were especially challenged in this as they had to confront the formidable power of Tammany. Dirty campaign tactics, muckraking, and bigotry contributed to the voter coercion and vote manipulation widely practiced by both parties.

Into this hotly contested milieu entered an Irish American who relished a tough fight and was not averse to starting one. General Michael J. Kerwin is recalled today as one of the more influential 19th Century New York Irish Americans. He was also controversial. Cheered or jeered, he lived a life of action, never shying away from opportunity or from controversy.

General Kerwin relocated to New York City from Philadelphia in mid-1870. He had commanded a Civil War cavalry regiment (he would be later nominated for the Medal of Honor) and was the former Secretary of War of the Fenian Brotherhood. Later he was a top man in Clan na Gael and also worked his way up the ranks of the Republican party.

To facilitate his political, Kerwin became the publisher and then the editor of a New York weekly, The Tablet, and he turned his newspaper into an organ of the Republican party. Realizing the value of securing a powerful political patron, he found one in New York Senator Thomas Platt, often referred to as ‘Boss Platt’.  Platt controlled the Republican patronage racket, from which Kerwin personally benefited.

By the election of 1888 Kerwin was a prominent New York Republican and as a trusted lieutenant of Boss Platt. In that election the Republican Party platform called for a tariff to protect American working men and American industry from foreign competition. The Democratic Party platform called for free trade and low tariffs. The Republican Party’s candidate was Benjamin Harrison, who was running against the incumbent Democratic President Grover Cleveland.

Key to the election of 1888 was, once again, the state of New York with its 36 electoral college votes, and key to General Kerwin was the New York Irish voter. To influence the Irish voter Kerwin, seemed to know no bounds. For the past several election cycles he referred to Democratic candidates as ‘English’ candidates and the Republican candidates as the ‘American’ candidates. The majority of Irish American voters at this time were immigrants, forced from Ireland by the brutality of the Crown’s administration. Kerwin capitalized on many Irish voters’ visceral distrust for England. In late-1888 the Cleveland administration inadvertently played directly into Kerwin’s hands with two ill-timed, and many thought ill-conceived, government contracts.

As the Republican National Campaign Committee ramped up its state election committees, it sent a proven party operative from Pennsylvania to the City of New York to help secure the New York Irish vote. That operative was Captain John C. Delaney, and he happened to be a former colleague and a fast friend of General Kerwin.

The two men, crafty and results-oriented, collaborated on a scheme to turn Cleveland administration foreign contracts into wedge issues to drive New York Irish voters away from the Democratic party. At the time, the British steamship State of Alabama was at work dredging New York Harbor.  The sight of the Alabama, flying the Union Jack, was a symbol of state coercion to the New York Irish developed into an election wedge issue by Kerwin and Delaney.

In this effort they targeted the New York longshoremen, a mostly Irish crew, by educating them to the harm the two Cleveland administration contracts were doing to the American working man and American industries. Right before their eyes the longshoremen could see a British steamship, flying the Union Jack, dredging their harbor. Why was this task not contracted to an American ship, many wondered? Because, it was implied, President Cleveland was the ‘English’ candidate and favored English shipping interests. Furthermore, why had the Cleveland administration awarded a contract to provide the U.S. Army with blankets from an English mill? Because, it was implied, as the ‘English’ candidate Cleveland favored English industry.

Kerwin and Delaney drove this point home with the purchase of a monthly newspaper, The Emancipator. They repurposed the sheet to circulate provocative illustrations. Among them, were two vividly described by Samuel Hudson in Pennsylvania and its Public Men (1909).

One shows the State of Alabama at work dredging the harbor. We may imagine that the Union Jack is seen prominently flying in the illustration. Another apparently shows a ship laden down with British blankets being sold to the U.S. Army.

Irish Americans weren’t the only targets of these illustrations, they also aimed at Union veterans. The State of Alabama brought to mind the CSS Alabama, the infamous Confederate raider, also built by in English shipyard, which did significance damage to American shipping during the Civil War. Hudson describes these two illustrations as having the effect of a red bandana waved before a charging bull. Delaney and Kerwin were, of course, both Irish Americans and Union veterans.

The Emancipator, was owned and edited by the mysterious “dynamiter” Professor Mezeroff until September-November 1888, when it was purchased by the Republicans.

I’ve been unable to finds the illustrations, and would welcome advice on the location of extant copies of The Emancipator from 1888. I’m hoping to use in an article on General Michael Kerwin in the journal New York Irish History.

Illustration: One of the handbills circulated during the 1888 election.

Ed O’Shaughnessy is a descendant of New York Irish families. He has a bachelor degree in history, and masters degrees in political science and executive management. He writes about 19th Century Irish and Irish American topics in the US, Canada and Ireland.