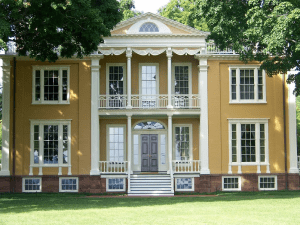 On December 31, 2019, Barnabas McHenry is set to retire from his role as Chair of the Board of Directors at Boscobel House and Gardens in Garrison, where he has served with distinction as a trustee since 1964.

Upon McHenry’s retirement, longstanding Board members Alexander Reese and Arnold S. Moss will serve as Acting Co-Chairs until the Board votes in a new Chair at its annual meeting in April 2020.

In addition to his role at Boscobel, Barnabas McHenry is a Palisades Interstate Parks Commissioner and the founding Chair of the Hudson River Valley Greenway. He has been a trustee and champion of the Metropolitan Museum of Art, New York City Ballet, Lincoln Center for the Performing Arts, the New York Zoological Society, the American Museum of Natural History, Scenic Hudson, Open Space Institute, and American Conservation Association, among others organizations.

Born and raised in Pennsylvania, McHenry graduated from Princeton University and Columbia Law School. A field artillery first lieutenant in the Korean War, he earned the National Defense Service National Service Medal, and the Korean Service Medal with one bronze star. After being admitted to the New York Bar in 1957, McHenry held a position as Associate at Lord Day & Lord, then works as General Counsel to The Reader’s Digest Association, Inc., and later became the Executive Director of Wallace Funds, where he worked with Boscobel’s founding patron, Lila Acheson Wallace.

More information on Boscobel House and Gardens is available on their website.