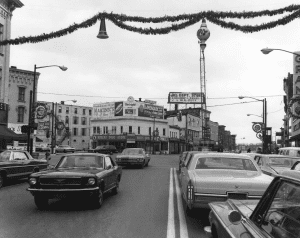 But to be certain, you would have wanted a second opinion, because only “The Shadow knows!”

The Glen Alden Coal Co., owner of the Blue Coal brand of anthracite coal, was national sponsor of the CBS radio drama “The Shadow,” among other radio shows.

“Blue Coal is Hot, Clean and Free from Slate,” a Post-Star advertisement touted the anthracite coal coated with a blue fuel oil dye to distinguish it from other brands.

“Mined, cleaned, prepared, sized and inspected, ‘blue coal’ comes to you always the same, always dependable, always the most satisfactory fuel you ever burned,” another advertisement boasted.

Listeners, for example, could call “G.F.4.” in advance to vote for which selections the Adirondack Ensemble Singers would perform.

The mixed-voice quartet, comprised of two Glens Falls executives and their wives, had a repertoire of 31 selections for listeners to choose from.

Or, listeners could call in with Contract Bridge questions for card game expert Laura French Howland, who later was Hudson Falls Post Master, to elaborate on.

A sheriff’s sale of “the equipment … a Victrola and a number of records,” scheduled for July 12, 1932, was canceled at the last minute when the partners were able to come up with enough money to pay off the judgement.

Parker and Metcalf had moved to Fair Haven, Vt, by that time, and by the fall Metcalf was living in New Jersey.

On Dec, 17-18, 1930, the station broadcast Glens Falls Kiwanis Club and Rotary Club meetings live from The Queensbury Hotel to promote the clubs to prospective new members.

Photo: Glens Falls decked for the holidays in a view down Glen Street toward Boxer’s Drug Store on the intersection of Glen and Warren Streets from late November 1968. Provided by the Folklife Center at Crandall Public Library.