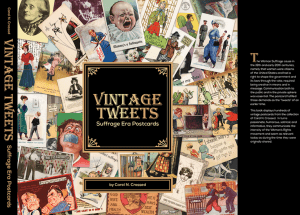 This book was released in conjunction with the opening of the National Woman Suffrage Centennial at a book signing in Seneca Falls. The Centennial marked the passage of the 19th Amendment to the U.S. Constitution, known as the Susan B. Anthony Amendment, granting women the right to vote.

The illustrations in Vintage Tweets: Suffrage Era Postcards are much like the Internet memes of today. The images include exaggerated caricatures accompanied by commentary that spread rapidly through the post media of the 19th and early 20th centuries.

The book’s narrative explains how certain images were used and by which organization. One of the anti-Suffrage postcards included in the book features an illustration of a rooster that reads, “my old woman wants to wear spurs!” Another, by the Dunston- Weiler Lithograph Co., is a father sitting in a rocking chair surrounded by his children, imply the mother has abandoned her family to attend a woman suffrage meeting. It reads “What is home without a father?” And below, “I don’t care if she never comes back.”

The author’s narrative explores the meaning behind the illustrations and tells of the support for and opposition to the early women’s movement. The postcards’ illustrations are often amusing and sometimes shocking. They cover complex domestic issues of marriage, childbirth as well as other suffrage concerns, such as abolition, temperance and dress reform. Vintage Tweets: Suffrage Era Postcards is a unique visual tribute to one of the most radical eras in U. S. history.

Carol Crossed was an editorial assistant for 15 years to the New York State Feminist, past editor of Voices for Peace and a contributor to Pro-life Feminism: Yesterday and Today. In 2006 Carol she purchased and restored the birthplace of Susan B. Anthony in Adams, Massachusetts. Four years later, it opened as a historic museum. In recognition of that accomplishment, she received the Northern Berkshire Massachusetts Business and Professional Women Award. Today she is president of Choosing Life of New York. She lives in Rochester, New York.