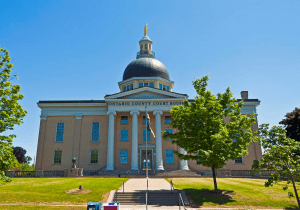 Susan B. Anthony was charged for having cast a ballot in the presidential election of 1872, accused of violating federal law and the NYS Constitution. Suffragists had been stunned and angered at women’s exclusion from the 15th Amendment which had given black men the right to vote in 1870.

This trial represented Anthony’s strategy to test what she hoped would be the new winning argument: that the 14th Amendment’s creation of national citizenship had given women the right to vote. Her task was to get the court to agree.

Schoharie Crossing State Historic Site is set to host Dr. Laurie Kozakiewicz from UAlbany to present on the Trial of Susan B. Anthony on November 19th as part of the Tuesday Talk series recognizing NYS History Month. The program will begin at 6:30 pm in the Enders House adjacent to the Schoharie Crossing Visitor Center, 129 Schoharie Street, Fort Hunter. Kozakiewicz is a lecturer in the Department of History, University at Albany, SUNY.

The final Tuesday Talk of the series will be on the 26th, a presentation by Anne Clothier who will present a workshop lecture about identifying 19th century photography methods called “Looking History in the Eye.” Photography was an emerging and changing new technology as well as art form in the 19th century. Clothier will be providing tips on identifying images captured during this era as well information about some of the methods used.

Refreshments will be provided, and donations are appreciated. For more information about this program, call the Visitor Center at (518) 829-7516, or email SchoharieCrossing@parks.ny.gov.