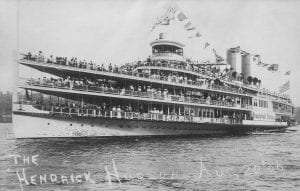 When steamboats plied the Hudson River it was a common occurrence to take the eight hour trip from New York City to Albany on a vessel adorned with chandeliers, oil paintings, and brass rails.
Multi-level, three and four hundred foot long vessels churned up the Hudson River at nearly twenty miles an hour with paddle wheels slapping, steam billowing from their stacks, and hundreds of people gathering at the rails to view the passing scenery.
U.S. Coast Guard Licensed Master Capt. Stanley Wilcox will speak about “Steamboat Days on the Hudson” in Kinderhook, Columbia County, NY on November 20th.  It’s a story filled with greed, frustration, and courtroom drama between the time of the first steamboat’s appearance on the Hudson River, to the more recent era of grand and opulent vessels. It began with the New York Legislature granting Robert Livingston and Robert Fulton a decades long steamboat monopoly (which ended with a decision from the U.S. Supreme Court argued by none other than Daniel Webster).
Capt. Stanley Wilcox holds a Coast Guard Master’s license and has served as Senior Captain on the Spirit of Hudson for the past 12 years. He is co-author of Capt Stan’s Hudson River Book, with foreword by Riverkeeper. The book, now in its fourth edition, has stories and history on more than 120 sites along the Hudson River, with 200+ color photos.  Wilcox has taught “Hudson River Boating and Seamanship” for many years at Columbia-Greene Community College, and has been guest speaker on American Cruise Lines.
This free lecture is hosted by the Columbia County Historical Society Volunteers and will take place on Wednesday, November 20th from 7:00 – 8:30 pm at Van Buren Hall, 6 Chatham Street, in Kinderhook.
Photo: Hudson River Steamboat Hendrick Hudson in 1906.