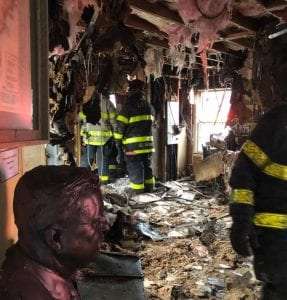 The National Park Service (NPS) has released findings and a follow-up corrective action plan for the December 2018 visitor center fire at Sagamore Hill National Historic Site in Oyster Bay, NY. The loss of the visitor center impacted the staff and operations at the park, as the building housed many aspects of park operations including staff, historic house tour ticket sales and a bookstore.

The NPS investigation into the cause of the fire was inconclusive, however they concluded that there did not appear to be any indications that it was intentionally caused. Several accidental causes of the fire were considered, including furnace malfunction, original equipment installation issues and storage practices. The report says the building had a monitored fire detection and alarm system and portable fire extinguishers and Park leadership and staff followed applicable NPS structural fire policies.

The fire, which caused no injuries, was detected by an automatic fire alarm system at 8:42 a.m. on Dec. 24, 2018. It was mostly contained to the furnace room and attic area. Due to the severity of the incident, William Kaage, Chief, NPS Division of Fire and Aviation, ordered a serious accident investigation. The Serious Accident Investigation Factual Report is available at the Sagamore Hill National Historic Site website. It includes investigations, findings and recommendations from the incident.

The NPS is planning to relocate the visitor center permanently to another adjacent park structure and restore a piece of the site’s cultural landscape the burned structure stood on. “Although the circumstances have significantly affected visitor services operations, the loss of the park’s visitor center is an unforeseen opportunity for the park to explore cultural landscape preservation options and explore alternative operations for a more engaging visitor experience,” stated Cecere.

Sagamore Hill National Historic Site preserves the former home of President Theodore Roosevelt. Roosevelt lived there from 1885 until his death in 1919. During Roosevelt’s time in office, Sagamore Hill served as the “Summer White House.”

Photo of the Sagamore Hill fire provided by the National Park Service.