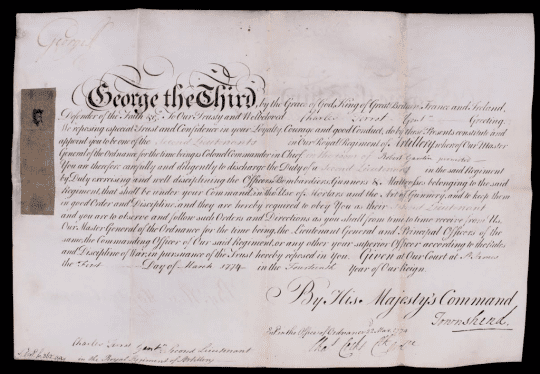 Terrot was commissioned in 1774 as a 2nd Lieutenant in the Royal Regiment of Artillery at the age of 16 after studying at the Royal Military Academy in Woolwich. He advanced with the British Army against the Americans in 1776. Fort Ticonderoga holds some of the letters Terrot sent back home, including one written following the battle, in which he includes a map of the pivotal engagement and drawings of the American ships. 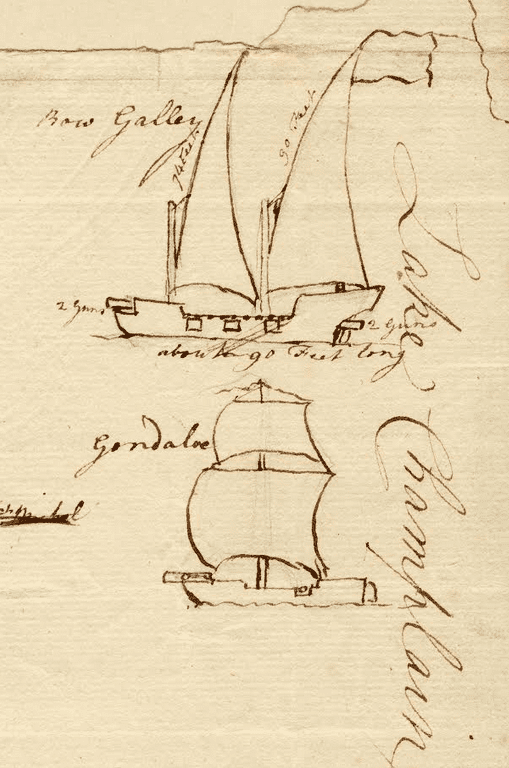 In 1777, Terrot again accompanied the British advance on Ticonderoga, now under General Burgoyne’s command, where he served as an acting assistant engineer at Ticonderoga when it was taken by the British.

Terrot also served under another famous officer of the Revolutionary War, Charles Cornwallis, in India in the 1790s, and against the French in the 1790s and 1800s, reaching the rank of General by the time he died in 1839.

“Terrot’s commission joins over a half dozen regular British commissions from the French and Indian War through the Napoleonic Wars in the collection of Fort Ticonderoga, and is all the more significant because it appears he carried this commission through his service in America, as indicated by the fold patterns and wear on the original document,” according to Fort Ticonderoga Curator Matthew Keagle.

“His commission rejoins his own account of the battle of Valcour Island and a copy of one of the most detailed maps of the Ticonderoga defenses which he prepared with another British engineer in 1777 in Ticonderoga’s rich collection of military artifacts.”

Terrot’s commission will join his letters and maps in Fort Ticonderoga’s archival collection. Access to the collection is available to researchers, who can examine Terrot’s commission and other letters along with hundreds of others. Funding is available for research through the Omohundro Institute-Fort Ticonderoga Short-Term Visiting Fellowship. .

Illustrations, from above: original commission of Charles Terrot and detail of Terrot’s map of the Battle of Valcour Island, courtesy Fort Ticonderoga.