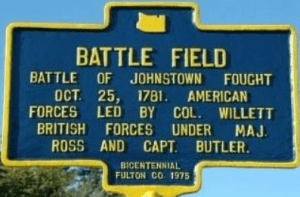 The Battle of Johnstown and the death of Walter Butler are considered two of the more important events in the final phase of the Revolutionary War in the Mohawk Valley. More than any other events in his life, these events are seen as raising Col. Marinus Willett from to the status of “Hero of the Mohawk Valley.”

Willett was born in Jamaica, NY (in Queens on Long Island). He served in the militia during the French and Indian War, and took part as a 2nd lieutenant in General James Abercrombie’s expedition to Fort Ticonderoga in 1758 and also with John Bradstreet’s army in the Battle of Fort Frontenac.

Willett was an informal leader of the Sons of Liberty in New York City, including as a rabble-rouser and street brawler. When news arrived on April 23, 1775 of the battles at Lexington and Concord he and others broke into the New York City arsenal and seized the weapons. On June 6, 1775 when the British soldiers in New York decided to evacuate the city, Willett stopped the soldiers from taking spare arms with them. On July 20, 1775 he and other members of the Sons of Liberty procured a sloop, surprised the guard, and captured a British storehouse at Turtle Bay.

Willett presided as a judge of Walter Butler, a loyalist tried as a spy, who was found guilty and sentenced to death. Butler, the son of John Butler (a wealthy Indian agent who worked for Sir William Johnson) was in command of the Loyalist Raiding party that attacked Cherry Valley in November 1778, and was considered one of the most hated loyalist in the region. Writer Stephen Vincent Benét listed Butler as one of the villainous jurymen, brought back from the dead to help Satan, in the 1936 short story “The Devil and Daniel Webster.”

The Fort Plain Museum is present a program on Marinus Willett, the Battle of Johnstown, and the death of Walter Butler by historian Terry McMaster, on Thursday, November 21st, at 6:30 pm.

McMaster is a researcher, artist/photographer and an addiction therapist. His ancestor Capt. David McMaster was a member of the Tryon Co. Committee of Safety, led the 6th company of the 3rd Regiment, Tryon Co. Militia, and fought at the battles of Oriskany and Johnstown.

There is a $5 admission that includes the talk and museum entry. The Fort Plain Museum is located at 389 Canal Street, Fort Plain. More information is available on their website.