George Washington’s brown Inauguration suit may have been plain for the times, but it was tailored from American-made broad cloth. The majority of cloth used in the United States in 1789 was imported from Britain, said Eliza West, an expert on 18th century textiles.

Wearing a suit of British-made fabric would have been a faux pas in the young nation that won its independence from Britain, so Washington asked cabinet member Henry Knox, of Fort Ticonderoga fame, to locate a suit of American-made cloth. The irony, West said, is that the cloth was of such quality that many people would not believe it was American made, and accused Washington of political incorrectness any way.

West, former Head of Costume at Fort Ticonderoga, was among seven speakers at the ninth annual Material Matters seminar Oct. 19-20 at Fort Ticonderoga. The conference for historians, teachers, re-enactors and others focused on using artifacts to interpret history. The conference illustrated the diverse range of niche specialty studies possible in the academic and museum career field, if one can find enough grant funding to support the endeavor.

“Buttons are easily overlooked” in the study of history, but can be very valuable in supplying information, said Matthew Keagle, curator at Fort Ticonderoga.

Military buttons found with 18th century bodies unearthed early this year during excavation for a housing project at the intersection of Courtland and Mohican streets in Lake George were used to identify what unit the soldiers likely belonged to, he said. 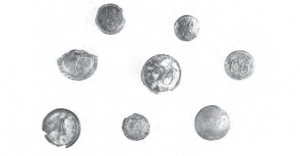 An intern recently inventoried the fort’s massive military button collection, and much of the information is now available on the fort’s database, Keagle said.

Artifacts, “an unbiased source,” make up the third leg in the stool of research resources, said Brett Walker, a “scholar artisan” shoe maker and independent historian who works with Fort Ligonier in Pennsylvania. The others are primary source documents and art.

Eighteenth century bayonets rarely are preserved intact with the fire arm originally attached to them, so two measurements are important in documenting their historic use, said Joseph Serbaroli, author of two books about bayonets. One measurement is the diameter of the bayonet’s muzzle, which can indicate what type of barrel the bayonet was attached to. The other is the distance from stud to muzzle, which can indicate where the barrel was made.

Ricardo A. Herrera, a professor of military history with the U.S. Army, leads officers on tours of historic battlefields to help explain historic military strategy. “Here is where we use the battlefield as a primary document,” he said. 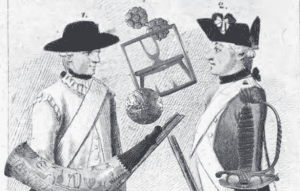 A recurring theme was that Britain continued to export products to and influence style in the United States, even in the shoulder epaulets that American officers wore early in the Revolutionary War. “It shows that as a new American nation, they’re still drawing from British style,” said Nicholas Spadone, director of interpretation at Fort Ticonderoga.

Some artifacts, such as food, have not survived, other than a few rare exceptions. “I did find out recently there is a piece of Alexander Hamilton’s wedding cake still in existence,” said Sara Evenson, a PhD student at SUNY Albany studying 18th century food.

By-and-large, food artifacts must be re-created, which, to be authentic, can be more complicated than it sounds. You can’t simply go to the supermarket and buy ingredients, Evenson said.

Eggs in the 18th century were smaller in size and had a different color yoke, for example. Evenson raises heritage breed chickens to lay eggs she uses to prepare an 18th century coconut custard pie recipe.

She hasn’t found a heritage breed coconut yet, which in the 18th century would have been imported from India or Southeast Asia. Evenson said if she was to find time to develop an 18th century-type coconut variety, she would start by studying antiquarian food articles and art. Still life paintings are a great resource to study the characteristics of historic food, she said.

West, the textile expert, has been studying 30 years of historic business records from the Broad Run Mill, a former historic woolen mill in Chester County, Pa.

In one instance, a 12.5-yard length of wool cloth was shrunk to 9 yards in the fulling process, which cleanses the cloth from oils, dirt and other impurities.

In order to determine how much light would have shown through the processed fabric, West replicated the fulling process by washing a similar fabric forty times in a modern washing machine, measuring after each load until it reached the desired length.

“It’s the ultimate experience of a college kid going home to use her parents’ laundry,” she quipped.