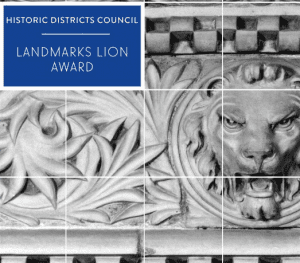 Since 1990, the Historic Districts Council in New York City has bestowed the Landmarks Lion award upon those who have shown unusual devotion and aggressiveness in protecting the city‘s historic buildings and neighborhoods. This year’s Landmarks Lion Award recipient is Anne Van Ingen.

Van Ingen has been a part of New York State’s preservation community for over 30 years. She served as the New York State Council on the Arts (NYSCA) Director of the Architecture, Planning & Design Program and Capital Projects from 1983 to 2010 working to empower historic preservation efforts throughout the Empire State. During her time working for New York State under four governors, she oversaw the investment of tens of millions of dollars into historic properties and organizations; funding programs totaling $3 million annually in support for more than 200 arts groups and municipalities. Among the many projects she helped initiate at NYSCA is the Preserve New York program, a re-grant program run by the Preservation League of New York State which, since its launch in 1993, has granted $2.8 million to 438 projects statewide and is directly responsible for the designation of numerous New York City and National Register historic districts.

In addition to her work at NYSCA, Van Ingen has been active in a variety of civic and nonprofits agencies, from the St. Regis Foundation, a land trust in the Adirondacks to the James Marston Fitch Charitable Foundation. She was an Advisor to the National Trust for Historic Preservation from 1999 to 2009, and served as Chair of the Preservation League of New York State from 2012 until 2019. She is currently the Co-Chair of the Adirondack Experience, The Museum at Blue Mountain Lake and since 2011, she has served as a Trustee of the Pratt Institute. Prior to joining NYSCA, she ran a historic preservation consulting business and held positions with several nonprofits and public agencies in New York and Massachusetts. She holds a BA in Art History from Middlebury College in Vermont and an MS in Historic Preservation from Columbia University. She has spoken and written widely on historic preservation, fundraising and philanthropy.

The Landmarks Lion award is HDC’s primary annual fundraiser. The award will be presented at the University Club, 1 West 54th Street New York, NY, on December 10, 2019, at 6:30 pm.