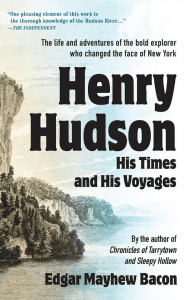 Edgar Mayhew Bacon’s Henry Hudson: His Times and His Voyages (republished by HVA Press, 2019) is a dramatic narrative of Henry Hudson’s nautical adventures  first published in 1907, during the tricentennial of Hudson’s voyage up the river that now bears his name.

Bacon takes readers on all of Hudson’s voyages, from the journeys that took him further north than any explorer before him, to the coasts of Iceland and Greenland, and the Hudson River. It tells of early interactions with Native Americans, and we follow him on the final voyage that took him to Canada and Hudson Bay – where he met his tragic end.

Edgar Mayhew Bacon was a member of the American Historians Association, and the National Geographic Society. A third generation Bahamian (his father was U.S. Consul in the Bahamas), Bacon was born in Nassau, probably Ragged Island, in the Bahamas in 1855. He moved to the United States with his family in about 1858, worked for a time in an Albany book shop, and by 1880 was a landscape painter living in Westchester County. He would spend most of his life in the Hudson River Valley.

In 1889, Bacon returned to the Bahamas, to write about the lives of free black people living there for Scribner’s Magazine.  In “Notes of a Sub-Tropic Study” he observed: “It is many years since the institution of slavery was abolished there, but still the colored inhabitants, who are greatly in the majority, are subservient to their white neighbors; the misfortune being that the latter are not always wise. The mingling of the two races has not been generally attended with the best results, for between them has sprung up an intermediate class which presents some of the worst characteristics of both. The white people are often amusingly proud of their English kinship, holding that nothing good can come from any other than the Albion spring. Opposed to these are a very few who are American in their leanings, and as absurdly confident that all goodness and worth, enterprise and might, centre in the ‘States.'”

Bacon returned to the West Indies in 1890 and visited Jamaica, publishing The New Jamaica in 1891. He was also the author of  The Pocket Piece (1892); Chronicles of Tarrytown and Sleepy Hollow (1897); The Hudson River from Ocean to Source (1902); Narragansett Bay (1904); Nation Builders (1906) and contributed to historical chapters in other books, and wrote various booklets and pamphlets while serving as Tarrytown historian. He died in December 1936 and is buried at the Sleepy Hollow Cemetery.