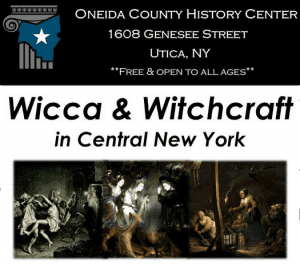 The Oneida County History Center has announced “Wicca & Witchcraft in Central New York,” a program set for Saturday, October 26th, at 11 am and 1 pm.

Two practicing Wiccans, known as Lady Awen and Lord Teiwaz, will explore concepts such as intuition, wives tales, superstitions, dowsing for water, and other long-held practices, celebrations, and beliefs through the centuries, and consider the tales and traditions handed down through the ages around the world.

Wicca is a modern Pagan religion. Scholars of religion categorize it as both a new religious movement and as part of the occultist stream of Western esotericism. Wicca was developed in England during the first half of the 20th century and was introduced to the public in 1954 by Gerald Gardner, a retired British civil servant. Wicca draws upon a diverse set of ancient pagan and 20th-century hermetic motifs for its theological structure and ritual practices.

Both presentation will be the same and seating is available on a first-come, first-serve basis.