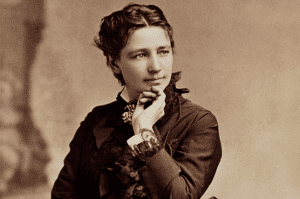 There is a long history of political and religious leaders preaching one thing in public and practicing something else in private, usually something related to sex.

Contemporary religious leaders “caught with their pants down” include Tony Almo, Jim Bakker, Ted Haggard, and Jimmy Swaggart. In the mid-19th century Henry Ward Beecher bridged both categories as a political and religious figure.

Victoria Claflin Woodhull (1838-1927), a whistleblower of sorts, has unfortunately been relegated to a historical footnote, partly because she is dismissed as a spiritualist and advocate for free love. But Woodhull deserves a much better historical fate, as the first woman to run for President of the United States in 1872 as the candidate of the Equal Rights Party, the newspaper editor whose arrest and acquittal led to puritanical Comstock laws, and the political progressive who exposed the sexual hypocrisy of Reverend Henry Ward Beecher of Plymouth Church in Brooklyn.

Beecher was America’s minister in the 1850s and 1860s, a champion of abolition who preached to thousands every Sunday, ran “auctions” to free enslaved young women, supplied weapons to John Brown, counseled Abraham Lincoln, and had his own Presidential ambitions – until he ran afoul of Woodhull.

Victoria Claflin Woodhull was a woman who traveled in the highest circles of New York society with ties to the wealthy and prominent progressive reformers. She was acquainted, if not friends, with Beecher, Theodore and Elizabeth Tilton, Frederick Douglass (who she proposed as a running mate in 1872), Cornelius Vanderbilt, Elizabeth Cady Stanton, and Susan B. Anthony. Her advocacy for spiritualism, belief in the existence of a spirit world after death, and claim to be a medium, while later a source of denigration, helped to open doors for her. With support from Vanderbilt, Woodhull and her sister Tennessee (“Tennie”) Claflin became the first female Wall Street stockbrokers and quite rich.

The sisters used profits from their activity as stockbrokers to found a newspaper, Woodhull and Claflin’s Weekly, to promote their views on feminism, including free love, and to support Woodhull’s 1872 Presidential campaign. The Victoria Woodhull Reader, edited by Madeleine Stern (Weston, MA: M & Press, 1974) contains much of Woodhull’s writing. The newspaper also printed Marx and Engel’s The Communist Manifesto in English for the first time.

Woodhull was not a before-her-time 1960s “flower child” and her beliefs about “free love” are definitely conservative by today’s standards. In the mid-19th century women were trapped in marriages by restrictive and patriarchal divorce laws and social stigmatism. While Woodhull believed in monogamous relationships, she argued arrangements could be temporary and demanded the right to sexual determination for women. In an 1871 speech in New York City, Woodhull declared, “I am a Free Lover. I have an inalienable, constitutional and natural right to love whom I may, to love as long or as short a period as I can; to change that love every day if I please, and with that right neither you nor any law you can frame have any right to interfere” (Stern, doc. I A 1). She challenged religious and political leaders who denied women sexual equality, especially those whose infidelity violated their own marriage vows. 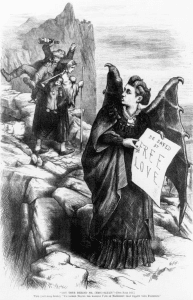 Woodhull also argued that the 14th amendment, which ensured citizenship rights to “all persons born or naturalized in the United States” and barred discriminatory practices, effectively granted women the right to vote, a right that was being illegally denied to them. In testimony before House of Representative and Senate Judiciary committees meeting in New York City, Woodhull demanded constitutional equality for women; “The male citizen has no more right to deprive the female citizen of the free, public, political expression of opinion than the female citizen has to deprive the male citizen” (Stern, doc. II A 1).

Woodhull gained her greatest notoriety in November 1872 when her newspaper charged that Beecher, who preached about fidelity in marriage and denounced Woodhull’s advocacy of “free love” as immoral, was involved in a multi-year sexual liaison with Elizabeth Tilton. Tilton was married to Beecher’s friend, fellow abolitionist, and Plymouth Church deacon, Theodore Tilton (Stern, doc. I A 2). Elizabeth, hoping to end the relationship with Beecher and reconcile with her husband, confessed to Theodore Tilton, who told Elizabeth Cady Stanton about the affair, who told Woodhull, who then spoke with Tilton. It was rumored that Theodore Tilton and Woodhull at some point had an intimate relationship, a rumor that Woodhull later confirmed.

Woodhull gave Beecher repeated opportunities to go public about his affair with Elizabeth Tilton. On May 22, 1871, in letters to the New York Times and the New York World, Woodhull wrote “My judges preach against ‘free love’ openly and practice it secretly” and hinted that she was ready to expose those who vilify her. “I know of one man, a public teacher of eminence, who lives in concubinage with the wife of another public teacher of almost equal eminence” (Shaplen, New Yorker, June 12, 1954; New York Times, May 22, 1871:5).

In a pamphlet reprinting the original article, Woodhull outlined her charges against Beecher (Stern, I A 2). She claimed that rumors of the affair between Beecher and Elizabeth Tilton were widespread for at least two years prior to her newspaper expose. She herself mentioned the affair in a speech to a Boston spiritualist convention and claims to have spoken with Beecher personally on a number of occasions, that he acknowledged the affair with Elizabeth Tilton, and denounced marriage and the social system as corrupt. However, despite pressure from Woodhull, Beecher remained publicly silent and she decided to act. In the pamphlet, Woodhull demanded to know why, if her report about his infidelity was false, Beecher had never sued her in court.

Woodhull’s decision to “out” Beecher came with consequences for both of them. The Tiltons initially refused to confirm the accuracy of her report, allies in the women’s rights movement, including Elizabeth Cady Stanton, turned against her, and two weeks after the article was published, Woodhull was indicted on obscenity charges for distributing her newspaper with the expose and held in jail for six months. Although the case was dismissed, Woodhull’s career as an American reformer was effectively over. She eventually divorced her husband and moved to England where she remarried and remained active in the struggle for women’s rights.

While Woodhull’s accusations about Beecher were originally ignored by the rest of the press, denied by the Tiltons, and dismissed by the public and the Plymouth congregation. Church charges against Tilton for impugning Beecher led to his expulsion from the Plymouth congregation and Beecher’s absolution. This finally forced Tilton to sue Beecher n Brooklyn City Court for stealing his wife’s affections. After a six-month trial stretching from January through July in 1875, the jury was unable to reach a verdict. Beecher remained as pastor of Plymouth, but his reputation was ruined by evidence presented at the trial and with it went his political ambitions.

Feminists like Susan B. Anthony and Elizabeth Cady Stanton and their National Woman Suffrage Association distanced themselves from Woodhull because of her advocacy of “free love,” but Woodhull’s conception of female freedom in relationships with men has triumphed in the modern era. Even more important today may be Woodhull’s broad reading of the 14th amendment which offers an expansive concept of citizen rights and due process guaranteed to all people.

Illustrations: Photo of Victoria Woodhull (cropped), c. 1860s, and “Get thee behind me, (Mrs.) Satan!” an 1872 caricature by Thomas Nast showing a wife carrying a heavy burden of children and a drunk husband, admonishing Victoria Woodhull – who is drawn as Satan and carrying a sign that reads “Be saved by free love” – by saying “I’d rather travel the hardest path of matrimony than follow your footsteps.”