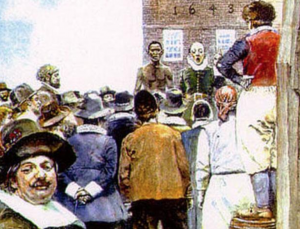 On Friday October 25, the New York City Commission on Human Rights will commemorate the 400th anniversary of the arrival of enslaved Africans at the British Jamestown colony in 1619.

“Reckoning with Our Legacy of Slavery and Charting an Anti-Racist Future” will be at the New York County Surrogate’s Court (31 Chambers Street, New York). There is no charge to attend but you must make a reservation. Email Christelle Onwu at conwu@cchr.nyc.gov by October 22nd, 2019.

The keynote speaker is Dr. Julianne Malveaux, African-American economist, author, social and political commentator, and former president of Bennett College for Women. Panelists include Hofstra University teacher educator and historian Alan Singer and Hofstra alumni April Francis Taylor, a teacher and Director of Student Life in the Mamaroneck, New York school district. Singer and Taylor worked on the team that developed the award-winning New York and Slavery: Complicity and Resistance curriculum in conjunction with the New York State Council for the Social Studies.

400 years ago, the island of Manhattan was very different, physically much smaller, and unrecognizable today. The island was hillier, covered with forest, had streams filled with beaver, and its inhabitants were the Lenape people who were part of the Algonquin language group that stretched along the Atlantic coast from the southern tip of Maine to the Virginia / North Carolina border. The Lenape population of the New York City region has been estimated at about 15,000 people.

The first Afro-European settler in the New York region is believed to be Jan Rodriguez. Rodriguez was born on the island of Hispaniola, the son of a Portuguese sailor and an African woman. He was hired by a Dutch ship’s captain as a translator on a voyage to Manhattan in 1613. When the ship left, Rodriguez remained, learned to speak the local Algonquin dialect, married into the Lenape tribe, and set up a trading post for beaver pelt, which were highly prized in Europe.

The Dutch settlement of New Amsterdam on the southern tip of Manhattan Island was established in 1624. Eleven enslaved Africans were brought to the colony two years later by the Dutch West India Company. From their names, we know that many originally had a Portuguese connection. The men were put to work building the infrastructure of the colony, clearing fields, dredging harbors, constructing buildings and defensive fortifications, and turning paths into roads. Women worked in households, which at the time was heavy work.

There was no history of slavery in the Netherlands so in the 17th century the colony and the company that controlled it had to define what slavery meant to a person’s status. Africans were permitted to marry in church ceremonies and petition for legal status. Some demanded freedom after a period of service. In the 1640s the Dutch colony was threatened by attack from other European powers and wanted to enlist enslaved African men in the militia. The men negotiated half-freedom. They were no longer enslaved, and received land to farm outside the Wall Street wall as a buffer against attack from the north, but they still owed some service to the company and they had to purchase the freedom of their wives and children. Today’s Greenwich Village once included an Afro-Dutch settlement.

Much changed when New Amsterdam became a British colony in 1664, including the name of the colony. New York is named after the Duke of York, the brother of the King, who was the head of the Royal African Company responsible for British involvement in the trans-Atlantic slave trade.

The British developed a legal system for slavery in its Caribbean colonies and Virginia and they gradually imposed this system in the New York colony. By the 1740s there were laws restricting the movement of enslaved Blacks, especially after dark, their ability to congregate together, their independent right to trade and earn income, and how and where they would be sold or rented out for labor. In the British town, most enslaved African women continued to work in white households. It is estimated that more than 40% of the white families were slaveholders. The men continued to work on infrastructure projects and in the port, many as skilled craftsmen in shipbuilding, supply, and repair. The enslaved African population of New York County grew from about 700 people in 1700 to over 2,000 by 1750.

Much harsher penalties were imposed for supposed or suspected disobedience and rebellion. There was a rebellion by enslaved Africans in 1712 and the freedom seekers were executed. There was a suspected plot in 1741 and more than 30 enslaved Africans and some whites were publicly executed after a staged trial and dozens of others were deported to Barbados sugar plantations. We know from hundreds of newspaper ads for the recapture of runaway slaves that there was a steady stream of freedom seekers during British colonial rule.

During British colonization enslaved Africans were permitted, in some cases required, to attend the Anglican church, but they were no longer permitted to marry and were not buried on church grounds. This led to the formation of an African Burial Ground just north of the British defense wall on what is now Chambers Street. The African Burial Ground was paved over as the city expanded north in the 1790s, although it was noted on historical maps. It was rediscovered in the 1990s during excavation for a federal office building and because on intense community pressure part of the site in now a National Monument.

Among the earliest opposition by whites to slavery in New York occurred in Flushing, Queens where the Quaker community forbade its members to be slaveholders. During the revolutionary period there began to be broader debate over the future of slavery in New York and the nation. Gouverneur Morris from the Bronx led an unsuccessful effort at the state’s Constitutional Convention to outlaw slavery. Alexander Hamilton proposed enlisting enslaved Africans in the Revolutionary army in exchange for freedom, but his idea was rejected. After the war John Jay, Aaron Burr, and Hamilton founded a New York Manumission Society that supported gradual manumission or a gradual phase-out of slavery in the state. As a side note, Hamilton’s wife’s father was a major slaveholder – Hamilton supported gradual rather than immediate emancipation. Burr and Jay shepherded the gradual manumission act through the state legislation in 1799 and in 1827 slavery ended in New York State, although transit laws permitted southerners to bring enslaved Africans with them when they passed through the state.

During the 19th century New York and Brooklyn, a separate city at the time, were important hubs on the Underground Railroad, especially Bridge Street and Plymouth churches in Brooklyn.

Frederick Douglass passed through New York on his escape to freedom. The twin cities were also home to important abolitionists like David Ruggles, Arthur and Lewis Tappan, and Henry Ward Beecher. Ruggles was a free Black man who formed a Vigilance Committee to block attempts by slaveholders to kidnap free Blacks and escaped slaves and transport them down South into bondage.

Even after slavery ended in New York, important local institutions were involved in the slave trade in the South and the Caribbean, including the bank that is now Citibank. New York had such close commercial ties with the South that in 1861 the New York Mayor Fernando Wood actually proposed that the city leave the union along with the slave states to maintain business interests. After the war Wood, as a Congressman, opposed the 13th Amendment ending slavery. A dark moment in New York City history occurred in 1863 when anti-military draft rioters turned on the city’s Black population and people were murdered in the streets.

When April Francis Taylor was a newly tenured teacher and graduate student at Hofstra University, she reviewed teaching material for the New York and Slavery: Complicity and Resistance curriculum and was drawn into a historical story that she never knew before. In most classrooms, students are taught that the North was opposed to slavery and the institution only existed in the South where enslaved people were needed to work on cotton plantations. As April studied the primary sources, lesson materials and activity sheets in the curriculum, she realized New York was one of the last of the original northern states to pass anti-slavery/manumission laws and continued to financially benefit from slavery after it ended in the state through its banking, insurance, and ship building industries and the sale of slave produced commodities right up until the Civil War. She decided she had to share what she learned through presentations at state and national conferences.

Years later, the implementation of this curriculum continues to impact me and the educators I meet that have utilized the resources provided.

In 2005, the curriculum was award the National Council of Social Studies “Program of Excellence” Award and it is shared with teachers online who report that it has equipped them to feel knowledgeable enough to have full discussions with their students. As the team presented the history of New York’s involvement with slavery and taught about it in middle and high school classrooms, there have been shifts in what is presented. For example, a greater emphasis is placed on the idea that people were forced into slavery, were “enslaved,” rather than were slaves. This minor shift in terminology is very powerful because it restores humanity to the people who had their freedoms taken away from them.

For April the greatest part about teaching and sharing this curriculum is its culminating activity, the New York and Slavery Walking Tour in lower Manhattan. A video about the tour is available online. New York City high school students create historical markers and serve as docents explaining the history of slavery in New York to middle and elementary school classes who take the tour, which features stops from the African Burial Ground to South Street Seaport. It’s a very powerful experience.