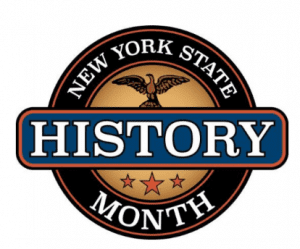 Each week a speaker will present on regional or New York State history. All presentations are free and open to the public, and will begin at 6:30 pm in the Enders House adjacent to the Schoharie Crossing Visitor Center, 129 Schoharie Street, Fort Hunter. Refreshments will be provided and donations are appreciated.

On November 5th, join Ulysses S. Grant Cottage State Historic Site Operations Manager Ben Kemp as he shares the compelling story of how famed Civil War General and two-term U.S. President Ulysses S. Grant ended up spending his final days in the foothills of the Adirondacks. Kemp will present, The Story of Grant Cottage: The Final Home of an American Hero. Grant’s last year is an inspirational tale of family devotion and a true character study of a man known for his triumph over adversity. Learn how the amazingly preserved Cottage atop Mt. McGregor, with sweeping views of the Hudson Valley and Green Mountains, became a historic site that has welcomed visitors for the last 135 years.

Historian Scott Haefner will discuss Transportation in the Mohawk Valley on November 12th. This presentation will explore the significance of the river valley in developing transportation to the West and covers the Bateaux era in the 18th century through Turnpikes, Canals and Railroads. Haefner is a registered historian and is the site manager of Old Fort Johnson, operated by the Montgomery County Historical Society.

Tuesday, November 19th Laurie Kozakiewicz Ph.D., a lecturer in the Department of History, University at Albany, SUNY will discuss the 1873 trial of Susan B. Anthony. The suffragette was charged for having cast a ballot in the presidential election of 1872 and in doing so she seemingly violated both federal law and the NYS Constitution. Suffragists had been stunned and angered at women’s exclusion from the 15th Amendment which in 1870 had given freed black men the vote. This trial represents Anthony’s strategy to test what she hoped would be the new winning argument: that the 14th Amendment’s creation of national citizenship had given women the right to vote. Her task was to get the court to agree. Our purpose in revisiting the trial is to get a better sense of the challenge’s suffragists faced in the late 19th century as they struggled to win the vote.

The last Tuesday Talk of the series will be on the 26th, a presentation by Anne Clothier who will present a workshop lecture about identifying 19th century photography methods called “Looking History in the Eye.” Photography was an emerging and changing new technology as well as art form in the 19th century. Discover tips on identifying images captured during this era as well as learn about some of the methods used to create lasting photographs. Clothier is a history educator from the Saratoga County region. Her particular interests include women’s history, textiles, medical history, and the history of photography.

November was designated as New York State History Month by the New York State Legislature in 1997 with the addition of Section 57.02 to the state’s Arts and Cultural Affairs Law.

For information about this program, call the Visitor Center at (518) 829-7516, or email SchoharieCrossing@parks.ny.gov.