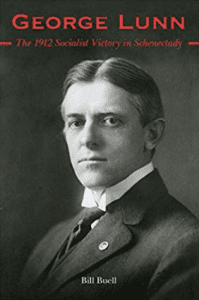 An Iowa native, George Lunn came to Schenectady in 1904 to become senior pastor at the First Reformed Church in the city’s Stockade Neighborhood. He entered politics in 1911 and was elected mayor of Schenectady as a member of the Socialist Party of America.

Lunn worked with General Electric scientist Charles Steinmetz to create Central Park and improve the city’s school system, and also initiated free garbage pickup and a health clinic, all while the city’s population was rapidly increasing due to immigration. He won the mayoral election four times, twice after switching to the Democratic Party, and also became a U.S. Congressman and Lieutenant Governor under Al Smith.

During his first term of office, Lunn was invited to speak in support of the 1912 Little Falls Textile Strike, but was denied permission by city officials in a public park. Refusing to be silenced, Lunn attempted to reading from the Gettysburg address and was one of four people arrested for “inciting to riot.”

Bill Buell is a life-long Schenectady County resident who spent 41 years – including 21 as a sportswriter and 18 as a news reporter – with the Daily Gazette newspaper. He graduated from Burnt Hills-Ballston Lake High School, Schenectady County Community College and the University at Albany, earning a degree in history. He has written books on Schenectady County and Albany County, and has won numerous writing awards, including a 2018 New York Press Association Award for a series on the history of the General Electric Company.