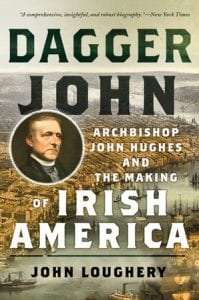 As archbishop of the Archdiocese of New York in the 1840s and 1850s and the most famous Roman Catholic in America, Hughes defended Catholic institutions in a time of nativist bigotry and church burnings and worked tirelessly to help Irish Catholic immigrants find acceptance in their new homeland. His galvanizing and protecting work and pugnacious style earned him the epithet Dagger John.

In Dagger John, Loughery reveals Hughes’ life as it unfolded amid turbulent times for the religious and ethnic minority he represented. Hughes the public figure comes to the fore, illuminated by Loughery’s retelling of his interactions with and responses to what seems to be every major figure of his era, including his critics (Walt Whitman, James Gordon Bennett, and Horace Greeley) and his admirers (Henry Clay, Stephen Douglas, and Abraham Lincoln).

Loughery peels back the layers of the public life of this complicated man, showing how he reveled in the controversies he provoked and believed he had lived to see many of his goals achieved until his dreams came crashing down during the Draft Riots of 1863 when violence set Manhattan ablaze.

John Hughes was part of a painful period of growth as the nation headed toward civil war. His successes and failures, his public relationships and private trials, and his legacy in the Irish Catholic community and beyond provide context and layers of detail for the larger history of a modern culture unfolding in his wake.

John Loughery is the author of three books, Alias S. S. Van Dine, John Sloan, and The Other Side of Silence, the last two of which were New York Times Notable Books. His biography of John Sloan was a finalist for the Pulitzer Prize in Biography.