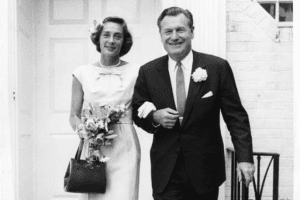 A thunderclap this was not. But 58 years ago, a different New York governor’s personal life was in the Times. He was, after all, a Rockefeller – with presidential ambitions. And it was a different time.

On Friday evening, November 17, 1961, the solemn word came down from Room 5600 at Rockefeller Center: Nelson Aldrich Rockefeller, age 53 and in his first term running what was still the nation’s most populous state, would be getting a divorce. Rockefeller had been married to the former Mary Todhunter “Tod” Clark for 31 years, since shortly after his Dartmouth graduation.

The most immediate question for political pundits: how would this affect Rockefeller’s White House ambitions? Sure, his State House predecessor, Democrat Averell Harriman, had also divorced. But that had been way back in 1929, and while Harriman had also run for president, he had never been seen as a front-runner. Rockefeller, on the other hand, was a favorite for the 1964 Republican nomination following intraparty rival Richard Nixon’s 1960 defeat. 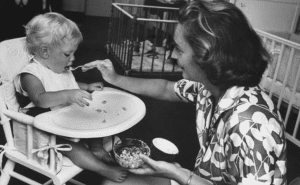 Until that time (and until Ronald Reagan), no divorced man had won the presidency, but divorce alone wasn’t the concern for Rockefeller’s advisers. The most concerning part of the episode lay in the circumstances surrounding the divorce announcement.

There was another woman.

Tod Rockefeller was a shy and somewhat austere 54, daughter of Philadelphia Main Line society and mother of five. Her rival was the very married and vivacious Margaretta “Happy” Fitler Murphy, a 35-year-old mother of four and a former member of Gov. Rockefeller’s office staff. Nelson and Happy would marry in May 1963, a month after her divorce (and renunciation of custody over her four children), and a year after his. Nelson, who had been easily re-elected to a second term in Albany in November 1962, would have two sons with Happy.

Public reaction to the marriage was mixed.

In June, former Senator Prescott Bush, father and grandfather of the future 41 st and 43 rd presidents, respectively, denounced Rockefeller’s conduct. Delivering the commencement address at the all-girls Rosemary Hall in Greenwich, Conn., Bush thundered, “Have we come to the point where a governor can desert his wife and children, and persuade a young woman to abandon her four children and husband? Have we come to the point where one of the two great parties will confer its greatest honor on such a one? I venture to hope not.”

Arch Moore, U.S. representative and Republican National Committeeman from West Virginia – a key presidential primary state – opined, “There is no question in my mind that his marriage will materially damage his image in West Virginia” – in contrast to the outwardly wedded bliss of White House incumbent John F. Kennedy and wife Jackie, expecting their third child.

By contrast, Nevada state GOP chair Jac R. Shaw noted that his state’s “history of being a divorce mill of the nation would mean that the effect here would not be other than beneficial.”

Unbowed by moralizing naysayers, Rockefeller announced his campaign for the presidency on Nov. 7, 1963 – almost six months to the day after his remarriage. In March 1964’s New Hampshire primary, he came in third behind the undeclared Henry Cabot Lodge Jr. of neighboring Massachusetts and Barry Goldwater, senator from Arizona. Over the next two months, Goldwater and Lodge traded wins until Rockefeller’s May 15 win in Oregon.

The stage was set for June 2 in California: Goldwater, a leading voice of the party’s rising Western conservative wing, against relatively liberal Easterner Rockefeller. Rockefeller campaigned hard and led several polls, but just before the critical last weekend of campaigning, he hopped a flight back to New York to be at Happy’s side for the expected birth of their first son, Nelson Jr. “I have a show opening on both sides of the continent the same weekend,” Rockefeller quipped. Whether due to his absence or the squalling newborn reminder of his colorful recent past, and in no small part due to the aggressive efforts of Goldwater and his supporters, Rockefeller lost narrowly, and Goldwater claimed the state’s 86 delegates. He was on his way to the nomination.

In July, at the GOP convention at San Francisco’s Cow Palace, Rockefeller failed to win a fight over the party’s platform and was nearly booed off the rostrum. He would go on to win a total of four terms as governor, and become Gerald R. Ford’s appointed vice president, but he never would gain the nomination as his party shifted rightward in the 1960s and 1970s. He died in 1979, by many accounts during a liaison with a young lady who was not his wife.

Of course Rocky was not the ultimate “Luv Guv,” to quote a New York Daily News headline. That moniker was attached to Eliot Spitzer, forced to resign in 2008 amid a prostitution scandal.

Photos, from above: Nelson Rockefeller and wife Happy, and Happy Rockefeller with Nelson Jr.