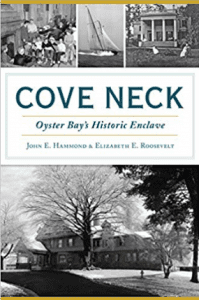 Looking out over the majestic waters of Oyster Bay, the village of Cove Neck has played an outsized role in the history of Long Island and the nation.

Theodore Roosevelt’s Sagamore Hill was home to the federal government during the summers of his presidency and remained his cherished residence throughout his life. Cove Neck played a role in the early days of motion picture history as the location of James S. Blackton and his Vitagraph Studios. The hardships of the village’s agricultural past were detailed in Mary Cooper’s colonial diary, and her Cove Neck farm still stands. Authors John E. Hammond and Elizabeth E. Roosevelt cover the history of Oyster Bay’s historic Cove Neck settlement

Elizabeth Emlen Roosevelt is the official historian of the Incorporated Village of Cove Neck, where she has resided for many years. Liz, as she is known locally, is a first cousin twice removed to President Theodore Roosevelt. She is a longtime member of the Theodore Roosevelt Association and currently serves as assistant treasurer of the organization. She taught history for thirty-two years, beginning at Syosset (New York) High School, where she taught for four years, and then spent one year in Hastings, New Zealand, and the balance of twenty-seven years at Friends Academy in Locust Valley, New York. Miss Roosevelt earned a BA in history from the University of Denver and an MA in history from Long Island University. She is a member of Seawanhaka Corinthian Yacht Club and an active competitive sailor. In her spare time, Miss Roosevelt volunteers for the Oyster Bay Historical Society as the manager of the gift shop in the Earle-Wightman House Museum.

John Edward Hammond is the official historian of the Township of Oyster Bay. Mr. Hammond is a lifelong resident of Oyster Bay, where some of his ancestors settled in 1653. He earned a BA from the University of the State of New York and is a graduate of Yale University Institute of Far Eastern Languages. He served in the United States Air Force Security Service from 1964 to 1968. He is the author of five books: Matinecock Light, Maple Hill Press, 1992; Crossroads: A History of East Norwich, privately printed by the Committee for the Beautification of East Norwich, 1997; When the Sirens Sound, Maple Hill Press, 1996; Oyster Bay Remembered, Maple Hill Press, 2002; and Oyster Bay: Images of America, Arcadia Publishing, 2009. He has also researched and authored four genealogical research guides: Historic Cemeteries of Oyster Bay; Index to Register of Deaths (1881-1920); Birth, Marriage and Death Records (1847-1849); and Civil War Records-Town of Oyster Bay.