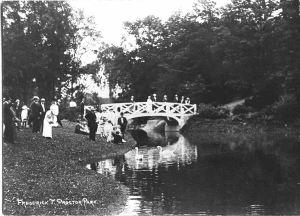 Utica is home to a park system that is unusually large and historic. Phil Bean is set to explain the local origins of these parks, the philosophy of the famous Olmsted family that designed them, and their place in American as well as local history, on Saturday, October 5th at the Oneida County History Center.

Phil Bean is a native Utican and a graduate of Proctor High School. He has earned degrees from Union College, Oxford University, and the University of Rochester and has held lectureships at Hamilton and Harvard colleges.

He has written a number of scholarly articles about Utica’s political and immigration history and a book, The Urban Colonists, about Utica’s Italian community, which was published by Syracuse University Press in 2010.

He served as a Dean for 20 years at Harvard and Haverford colleges before returning to his hometown to become Executive Director of the Central New York Conservancy, which seeks to restore, preserve, and promote Utica’s Olmsted park and parkway system. More information about the Conservancy can be found on their website.

This program takes place in the History Center’s main gallery, starting at 1 pm.