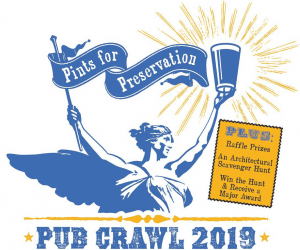 The Saratoga Springs Preservation Foundation is set to hold the 9th Annual Pints for Preservation Pub Crawl on Saturday, September 28.

People can take part in an Architectural Scavenger Hunt. Raffle tickets will also be available to win several prizes from local businesses such as a private cigar tasting for eight from James & Sons Tobacconists, a curated gift set from Impressions, and more. The crawl will culminate with an after party including light fare at Saratoga City Tavern where winners will be announced.

Tickets are $35 for an individual, $60 for a couple, and $120 for a group of four. All participants will receive a complimentary Pub Crawl t-shirt and pint glass with purchase of tickets, while supplies last. The online registration deadline is Friday, September 27th at 5 pm. Participants may also register the day-of the Pub Crawl at Druthers starting at 2:30 pm.