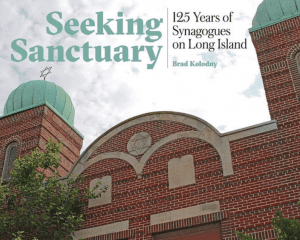 Brad Kolodny’s new book Seeking Sanctuary: 125 Years of Synagogues on Long Island (Segula Publishing, 2019) provides an history, inventory, and photo archive of every synagogue, past and present, in Nassau and Suffolk Counties.

Over the past four years Brad Kolodny has visited nearly 400 buildings on Long Island that have been used as a synagogue. His photographs of these Jewish houses of worship together with details about their origin fill the pages of his new book.

In addition to profiles of the synagogues, the book explores the history of Judaism on Long Island beginning in the early 1700s, including little known and long forgotten details. One example shares the story of a ceremony held on September 2, 1896 for the dedication of the first synagogue built on Long Island. The exterior of the new synagogue, located on Main Street in Setauket, was described as being “gay with bunting and colored lanterns” for the celebration.

The book also sheds light on the establishment of the Hebrew Union of the Town of Hempstead in 1897 and the Nassau Country Hebrew Association formed in 1902. Neither of these groups lasted very long, but individuals involved were instrumental in the three early synagogues: B’nai Sholom in Rockville Centre built in 1915; B’nai Israel in Freeport built in 1920; and Beth Israel in Hempstead also built in 1920.

Brad Kolodny began photographing synagogues around the world as a teenager in the 1980s. He has photographed nearly 600 synagogue buildings in 13 countries and set his sights on photographing every synagogue on Long Island in 2015.