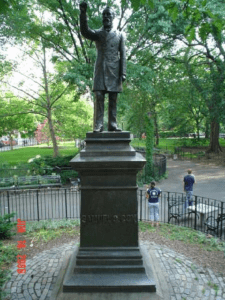 As part of the New York Times’ 1619 Project, examining the history of race and racism since slavery was introduced into British North America four hundred years ago, D’Angelo Lovell Williams argues that race and racism have long torpedoed efforts to implement universal health care in the United States.

According to Williams, federal policy, starting with the end of the Civil War in 1865, was based on the belief that “free assistance of any kind” to newly freed Blacks would “breed dependence and that when it came to black infirmity, hard labor was a better salve than white medicine.”

Those are beliefs echoed in politics and rhetoric today, but one of the worst racists in the United States Congress at that time, whose views shaped post-Civil War policy, was Samuel Sullivan Cox. During the 38th session of Congress, Cox led opposition against the formation of a Freedmen’ Bureau to assist newly emancipated Africans based on his belief that that African race was doomed to extinction by its inherent inferiority and inability to survive outside of bondage.

Ironically, a statue that honors Cox still stands in the southwest corner of Tompkins Square Park in Manhattan. Cox was first elected to Congress in 1856 as a Democrat from Ohio, but after being defeated for reelection in the Lincoln Republican Party sweep of 1864, he relocated to New York City where between 1868 and 1889 he was returned to Congress with the support of the Tammany Hall machine.

The plaque on the statue describes Cox as the “postman’s friend” for his efforts in the 1880s helping federal employees secure better wages and working conditions. What is missing from the plaque, and the reason the Cox statue should be taken down, is Cox’s virulent racism. In June 1862, during Congressional debate over accepting ambassadors to the United States from Haiti and Liberia, Cox proclaimed, “these Commonwealths and this Union were made for white men; that this Government is a Government of white men; that the men who made it never intended, by any thing they did, to place the black race on an equality with the white.” In 1865, while still a lame duck member of the 38th Congress, Cox was one of 56 representatives to vote against the 13th amendment to end slavery.

Cox, who published transcripts of his speeches in a book, Eight Years in Congress, From 1857-1865, is also notorious for accusing abolitionists of championing miscegenation, racial “amalgamation,” to produce a hybrid group that would rule the country and that would destroy the white race. In December 1863, a pamphlet published anonymously by a Copperhead editor and reporter from the New York World claimed Lincoln and the Republican Party were promoting the “interbreeding” of “White” and African Americans. In February 1864, during his argument against the Freedman’s Bureau, Cox introduced the pamphlet into Congressional debate and argued that the product of miscegenation would be a monster that would “scarcely survive beyond one generation.” For Cox, “The irrepressible conflict” was “not between slavery and freedom, but between black and white.”

Despite Cox’s efforts, including repeated motions to table a decision, an underfunded and understaffed Freedmen’s Bureau was finally established by Congress on March 3, 1865.

Officially, it was the Bureau of Refugees, Freedmen, and Abandoned Lands under United States Department of War. However, as Southern white terrorism expanded and Northern reaction against the cost of Reconstruction built, the bureau was shuttered before the election of 1872.

Meanwhile racist stereotypes, an inadequate national health care system, the Samuel Sullivan Cox statue and other remnants of an unacceptable past, continue to plague the United States.