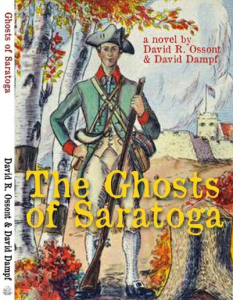 David R. Ossont and David Dampf’s new novel The Ghosts of Saratoga (Milford House Press, 2019) takes a look back at the American Revolution Battles of Saratoga.

In Ghosts of Saratoga, the fate of North America and maybe the world is at stake. It is June 30, 1777. A young scout of the Continental army watches the arrival of British general John Burgoyne and his invasion force of 8,000 men. Seventeen-year old Roland McCaffrey is a new soldier but already a skilled woodsman and crack rifleman.

Burgoyne’s plan is to cut the American colonies in two and crush the new rebellion. His army includes some of the best trained units in Europe. To stop them, the rebels must bring together inexperienced soldiers, militia and Daniel Morgan’s riflemen.

In the action that follows, Roland travels with his sergeant, the powerful and dangerous Caleb O’Connor. To his surprise, Roland becomes a skilled sniper. He is not sure how to feel about his talent for killing, but the young man becomes an important part of the rebel force. The fighting rages from the Canadian border to Saratoga. There, in the Battles of Saratoga, under the command of the famed American general Benedict Arnold, Roland will play his part in the fights called “the turning points of the American Revolution.”

David R. Ossont has worked as a musician, a Fish and Wildlife Technician and for nearly three decades taught science to seventh and eighth graders. He received his college education from several colleges of the State University of New York. He lives in upstate New York, not far from where the events of Ghosts of Saratoga take place.

David Dampf has been a middle school social studies teacher for the past 28 years. He has a Bachelor’s degree from SUNY Potsdam with a major in history and secondary education and a Master’s degree in reading from SUNY Cortland. He lives in Oneida, New York, with his family.