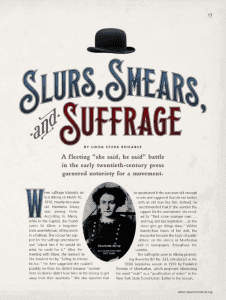 The New York State Archives have announced that the program “Anna & Henrietta Mercy: Militant Maids of the Lower East Side”is set for September 8.

Sisters Anna & Henrietta Mercy were a dynamic duo of socialist activism in the Lower East Side of Manhattan.  As young children they immigrated to the United States from Austria with their parents in the late 1800s; as young women, they devoted their time and many talents to the East Side Equal Rights League’s agenda of women’s economic and political equality.

They made national headlines in 1910 when Henrietta Mercy and long-time Tammany Hall politician James Oliver became embroiled in a “she said-he said’ incident that suffragists used to their rhetorical advantage. Largely forgotten today, the Mercy Sisters were important pieces of what suffrage pioneer Alice Paul called the “great mosaic” of social change.

The guest speaker will be Linda Czuba Brigance, professor emeritus at SUNY Fredonia, whose article, “Slurs, Smears and Suffrage,” appeared in the Winter 2019 issue of New York Archives magazine.

This program is free and open to the public. It will be held Sunday, September 8, with refreshments at 12:30; and the program beginning at 1:15 pm, at the Sage Colleges – Albany Campus, Campus Center Room 224.