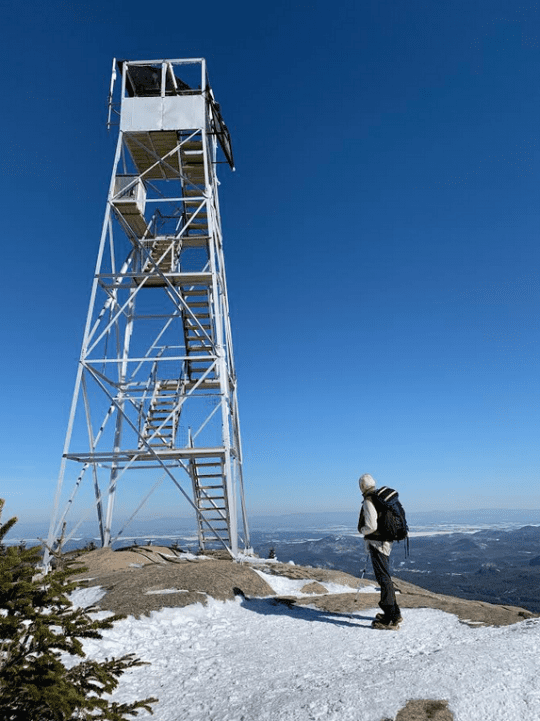 A historic exhibit marking the 100th Anniversary of the Hurricane Mountain Fire Tower is set to open on Thursday, August 8th, at the Adirondack History Museum.

Festivities begin at 5 pm with a reception featuring a local Hurricane brew from Ledge Hill Brewery, and tours of the new exhibit.

At 7 pm, there will be a discussion on the history and future of “Protecting the Adirondack Forest – Past and Present,” featuring fire tower history and current efforts to mitigate the effects of increased numbers of visitors. An estimated 12 million people visited the Adirondack Park in 2017, most of them for outdoor recreation, and 75 percent of them for hiking. Hurricane was recently termed the “Best Hike in New York” by the widely read Outside Magazine. Panelists will be Willie Janeway, Executive Director of the Adirondack Council, and Laurie Rankin, President of the Forest Fire Lookout Association New York Chapter.

The Hurricane exhibit includes art and artifacts, historic photos and documents, interviews with fire tower veterans, and dozens of photos contributed by families and individuals who have hiked the 3,694-foot mountain over the years.

A hike to the summit is also planned, for Saturday, Aug. 10, along with a shorter hike to the site of the old observer’s cabin. In addition, on most Saturdays and Sundays in August, there will be exhibits on display at the Holt House, Marcy Field, Keene Valley, from Aug. 10 to Aug 31.

The tower was constructed in the summer of 1919, as part of a New York State early warning system to combat the fires that consumed nearly a million Adirondack acres in the first two decades of the 20th Century. It was closed in 1979, almost torn down, but then restored and reopened for public access in 2015, following a strong local citizens’ campaign.

The tower, which virtually straddles the boundary line between the towns of Keene and Elizabethtown, is now maintained under a partnership agreement between the NYS Department of Environmental Conservation and the volunteer group, Friends of Hurricane Mountain. Working with the state and the Town of Keene, the Friends employ a summit steward to educate the thousands of hikers who climb the peak each summer.

The Friends worked with the Adirondack History Museum to mount the 100th Anniversary exhibit. The exhibit is also supported by the Essex County Council of the Arts and the Hurricane Chapter of the Adirondack Mountain Club.

Admission to the event is free, but donations are appreciated. Those wishing to sample the Hurricane brew will need to purchase a special commemorative mug.

The Adirondack History Museum operates Tuesday-Saturday 10 am to 4 pm, and Sunday from noon to 4 pm. Admission is $5 for adults, $4 for seniors, and $2 for students.