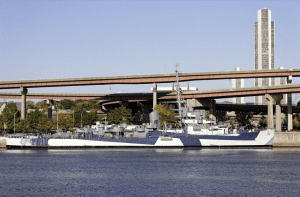 Friends of the USS Slater are set to commemorate the 229th Birthday of the United States Coast Guard on Sunday, August 4 at 9 am with a ceremony aboard the ship in Albany. “Coasties” and their friends and families are invited to attend.

The United States Coast Guard, one of the country’s five armed services, is a unique agency of the federal government. The service was founded on August 4, 1790 when the first Congress authorized the construction of ten vessels to enforce tariff and trade laws and prevent smuggling. Known variously as the Revenue Marine and the Revenue Cutter Service, the Coast Guard expanded in size and responsibilities as the nation grew.

It is appropriate to celebrate the Coast Guard’s Birthday aboard USS Slater as during World War II the Coast Guard manned hundreds of Navy and Army vessels including 30 Destroyer Escorts. Coast Guard-manned ships hunted enemy submarines, protected convoys to Europe, delivered troops and supplies to the various theaters of the war, and operated landing craft which delivered troops to the invasion beaches.

Coast Guard cutters and destroyer escorts played a pivotal role fighting Nazi U-Boats in the Battle of the Atlantic. Following the war, during the 1950s, destroyer escorts were once again called into Coast Guard service to serve as weather ships. The Slater volunteer crew includes a strong Coast Guard contingent, dedicated to preserving a piece of American history.

USS Slater is open Wednesday through Sunday, 10 am to 4 pm, through December 1st. Admission is $9 for adults and $7 for children. The ship is located on the Hudson River in Downtown Albany just south of the Dunn Memorial Bridge.