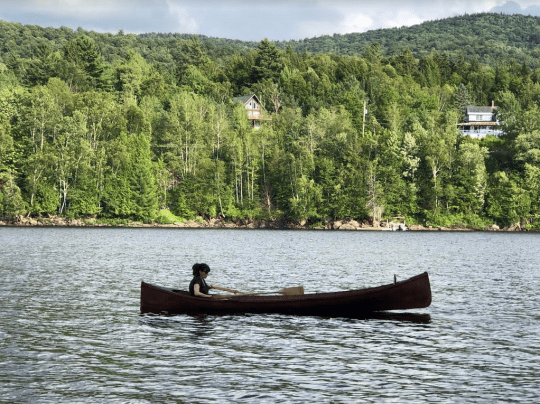 Charles Bryan, in The Raquette, River of the Forest (1964), argued that Long Lake played a major role in the development of the Adirondack Guideboat.

That legacy got a local revival recently, when Long Lake resident Colleen Smith re-launched a guideboat on Long Lake built there by her grandfather George W. Smith in the early 1900s.

A neighbor, Gordon Fisher, spotted an advertisement for the boat and recognized it was made in Long Lake, but was unsure of the builder. Fisher contacted Long Lake boat builder Bunny Austin about brokering the vessel on behalf of the owner, who was living on Lake Champlain; it had been in the seller’s family since the 1950s. Austin turned the job over to his nephew Keith Austin, also a boat builder. His wife Debbie Austin spotted the signature of Geo W. Smith on all three of the seats she was re-caning. The boat is thought to have been built around 1907, at the time George W. Smith was operating a boat building shop on North Point Road in Long Lake. A mutual friend knew of Colleen Smith’s connection – she’s the granddaughter of George W. Smith. She purchased the boat and returned it to the waters of Long Lake at Endion on July 19th, 2019.

Three generations of Smiths were on hand to witness the soaking and launching. Long Lake native Gail Emerson was also there. Her grandfather Wallace Emerson was a contemporary of George W. Smith and the two granddaughters stood side-by-side on the shores of Long Lake for the historic re-launch.

Photo of Colleen rowing the boat on Long Lake by Alexandra Roalsvig.