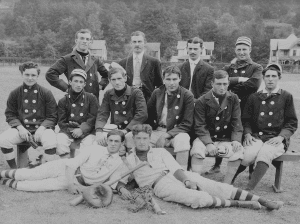 The Time and The Valleys Museum is set to host the Mountain Athletic Club (MAC) of Fleischmanns and the Atlantic Base Ball Club of Brooklyn at the Grahamsville Fairgrounds in Sullivan County for a nineteenth century baseball showcase, on Saturday, August 24.

The games will begin with a first pitch at noon. Immediately preceding each of the contests, a brief discussion cover the prominent rule variations of the era being played. Admission is free and souvenirs and refreshments will be available for purchase at the concessions stand. Spectators are encouraged to arrive in period-appropriate nineteenth-century attire if they are so inclined.

The first game will be played by the rules and customs of base ball in 1864 (that’s right, it was spelled with two words back then). Some rules of the modern game can be traced back to rules established in 1864, such as ninety-feet between bases and nine inning games (agreed upon by both teams prior to the start of the game). But that is where resemblance to the modern game stops.

Fielders do not wear gloves, at all; gloves would not arrive until the 1880s. The base balls are also stitched differently – often called a “lemon peel” – and made slightly larger than the modern “horseshoe” ball. And a batted ball caught on a “bound” or one bounce is an out. Of particular interest is that pitches are tossed underhand from a pitcher’s box 45 feet from home plate – a round metal dish ten inches in diameter.

Furthermore, umpires will not call a ball or strike on the batter until they issue a warning: either to a pitcher for not serving up a hitable pitch, or to the batter for being too choosy with what to swing at. The Brooklyn Atlantics have been playing this style of base ball at Atlantic Field on the grounds of the Smithtown Historical Society in Smithtown, NY since 1997. But the team itself dates back to 1855. In fact, the Atlantics were recognized as National Champions back in 1864 and 1865, having gone undefeated both seasons.

The second game of the showcase will be played according to the rules and customs of 1895 – the year that brothers Julius and Max Fleischmann built their very own Field of Dreams near their family’s sprawling Catskills estate in Griffins Corners, NY. It was on these grounds that the baseball-loving duo would spend some of their yeast-making fortune to establish the Mountain Athletic Club and furnish it with a crop of talent that gave professional teams of the day a run for their money.

Long before the notion of spring training in a warmer climate became vogue, Fleischmanns Athletic Grounds served as a training facility for pro ball. The early years of the M.A.C. produced three players on the 1906 World Series Champion Chicago White Sox, dubbed the “Hitless Wonders.” Nearly a dozen or more M.A.C. players would go on to have solid careers in the major leagues including Johannes “Honus” Wagner – considered to be among the best shortstops in baseball history and a first-ballot Hall of Famer in 1936 and Miller Huggins, also a Hall of Famer who managed the famous “Murderer’s Row” of Babe Ruth and Lou Gehrig in the 1920’s.

Huggins was just a “babe” of his own when he played for the M.A.C. In 1900, he appeared under the pseudonym “Proctor” out of fear he might lose his NCAA scholarship for his participation in a semi-professional game versus the Cuban Giants – an all-African American club.

In 1902, the Fleischmann brothers purchased principal ownership of the Cincinnati Reds and Julius would later go on to serve two terms as Mayor of Cincinnati, all the while coming back to play or watch a ball game at his M.A.C. Grounds until his family’s exodus from the Catskills in 1913. Following the family’s departure, on May 11, 1914, Julius donated the M.A.C. Grounds to the newly incorporated Village of Fleischmanns – a name it holds to this day. This year marks the 150th anniversary of the Fleischmann’s Yeast Company and next year, the Village plans to commemorate 125 years of base ball at “the Athletic Grounds” with a listing on the National Registry of Historic Places.

This event will take place at the Grahamsville Fairgrounds in Sullivan County on Saturday, August 24, with the first pitch at noon.  The Time and The Valleys Museum is located at 332 Main St, Grahamsville. More information is available on their website.

Photo of Brothers Julius and Max Fleischmann pictured back row center with their Mountain Athletic Club circa 1895, courtesy Robert Mayer.