With Lake Erie covered with ice, “a band of the invaders determined to make it an avenue of passage across to Canada at a point where discovery would be improbable,” according to Our County and Its People, A History of Erie County published in 1898.

Word spread among those who were willing to oppose Crown rule of Canada with force, to gather at Bayview, NY, just south of Buffalo, and cross the lake to Canada where they expected Canadians eager for liberation.

But that word also slipped to local authorities in Buffalo, who were intent on preventing an escalation of hostilities. A company of local militia went onto the lake in sleighs, and three or four miles out discovered as many as 40 armed men encamped on the ice.

“These patriots promptly surrendered, their shanties were demolished and their arms captured,” according to that 1898 history of Erie County.

As the militia looked around, they saw hemlock boughs stuck in the ice.

“An unusual aspect of their preparation was a nearly straight line of hemlock bushes extending from their camp to the Canadian shore. They had planted the bushes in holes made in the ice, then freezing them, as that it served as a route to follow for the invading army in the night lest they lose their way and perish on the ice fields,” according to a local newspaper.

A couple weeks later, in February 1838, a much larger party of armed men gathered near a tavern on the Lake Erie shore, also south of Buffalo. They numbered between 300 and 400, and this time they had a cannon, according to White’s history of Erie County.

“On the 24th of February a detachment of regulars and volunteers and the crew of a revenue cutter, all under command of Colonel Worth, who had returned from the West, marched out of Buffalo, surprised the camp, captured their cannon and dispersed the men,” according to the Erie County history.

That was the last of the patriot invasion efforts in Western New York, but passions remained high. The patriot army that evacuated from Navy Island divided. One column headed west and the other east. Hundreds more American volunteers joined the patriot army along the routes to new battlegrounds.

Much more blood would be shed in the months that followed.

Thomas Jefferson Sutherland, who had rallied Buffalo residents when MacKenzie arrived in early December, went to the Detroit area to lead an invasion near the western edge of Lake Erie. Many of the Navy Island soldiers followed, and volunteers from Michigan, Ohio, Pennsylvania and other Midwest states joined as well. Their number reached over a thousand. They raided local arsenals and took weapons and cannons. They also seized a schooner, the Anne, and headed for the Canadian shore.

From January through December of 1838, the patriot invaders reached Canada in a series of skirmishes along the Detroit River from Fort Malden, at the southern end where the river flows into Lake Erie, to Windsor at the north, near Detroit. The invasions did not go well for the patriots. They had to contend with British soldiers and Canadian militia defenders on one side, and the American authorities and militia trying to stop the invasions on the other side each time, the patriot invaders were quickly pushed back, and when they retreated, American authorities often were waiting to arrest them.

The bloodiest and perhaps pivotal patriot invasion occurred much farther east, near Prescott, Upper Canada, across the St. Lawrence River from Ogdensburg, N.Y. 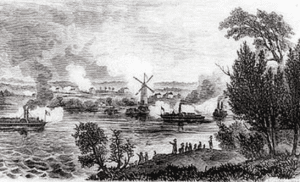 An invading army of 170 to 200 patriots landed at Windmill Point on Nov, 12, 1838, eluding American forces trying to stop them.

The patriots got no farther than a stone windmill near shore, where they held off 500 British soldiers and more than 1,000 militia over four days before surrendering. More than 50 invaders were killed, 60 wounded and 157 taken prisoner.

The Patriot War was over, and MacKenzie was a wanted man in Canada and a prisoner in the United States. 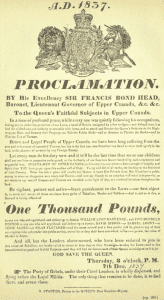 The British still had a bounty on his head at the end of 1838. What’s more, he faced trial in the United States for violating the Neutrality Act. It was the first trial for violating the law, which was enacted in 1794.

At the conclusion of his two-day trial in Canandaigua, N.Y., in June 1839, MacKenzie spoke for six hours.

“I have been told to say pleasant things to you, to use honeyed words, and avoid any topic that might touch the national pride or wound the national vanity; but as I did not stoop to flatter power in the few on the other side of the Great Lakes, it is not likely that I shall cringe to it here…,” he said.

The jury found him guilty after deliberating two and a half hours. MacKenzie was sentenced to 18 months in the Monroe County Jail and fined $10. He could have received three years behind bars and been fined $3,000.

After serving his prison term, MacKenzie lived in New York City. He returned to Toronto in 1849, when he received a pardon. He died there in 1861.

These days, few people in America know of the Patriot War. But the British raid to destroy the Caroline set a precedent that is recognized throughout the world nearly two centuries later. The principle of preemptive strike became known as the Caroline Test, which Britain insisted was an act of self-defense.

The Caroline Test is still part of customary international law, recognized by the Nuremberg Tribunal and the United Nations. It holds that a preemptive strike is justified only when the threat of an attack is imminent, and peaceful solutions are not an option. Also, the use of preemptive force must be proportional to the threat of attack.

“Thus the destruction of an insignificant ship in what one scholar has called a ‘comic opera affair’ in the early 19th century nonetheless led to the establishment of a principle of international life that would govern, at least in theory, the use of force for over 250 years,” Thomas Nichols, a professor at the U.S. Naval War College and Harvard Extension School, wrote in his book, The Coming Age of Preemptive War, published in 2008.

The futile rebellion that MacKenzie launched also is credited with reform and eventual independence for Canada.

Britain sent John George Lambton, the Earl of Durham, to investigate the causes for the insurgency, and he reported back that a corrupt elite controlled the government of Canada. “A monopoly of power so extensive and so lasting could not fail, in process of time, to excite envy, create dissatisfaction and ultimately provoke attack,” his report said.

Lord Durham recommended a united Canada (Ontario, Quebec and the Maritime Provinces) and advocated a legislative government elected by the people and possessing significant authority and power.

It took many years for these reforms to be enacted, but Lord Durham’s report confirmed for many in England the validity of MacKenzie’s grievances.

“He encountered a thoroughly bad system of government and administration and enormous public abuses. These he persistently assailed, and, in the long and bitter conflict which closed with the rebellion, he received no quarter.”

While MacKenzie later found pardon and redemption in Canada, many of the Americans captured while fighting for an independent Canada were not as fortunate.

After the Windsor-Detroit campaign, four American patriots were summarily executed and 18 were sent to penal colonies in Australia. And after the Battle of the Windmill on the St. Lawrence, the British tried and hanged 11 Americans and then sent 60 captured Americans and 58 Canadians to penal colonies in Australia. Many were taken there aboard the HMS Buffalo.

Read the first of this three part series on the Patriot War here.

Images, from above: Print showing fighting during the Battle of Montgomery’s Tavern; map showing the location of Navy Island; View of the Battle of Windmill Point courtesy Library and Archives Canada; reward proclamation for William Lyon MacKenzie, courtesy from volume 1, page 261 of Robertson’s Landmarks of Toronto by J. Ross Robertson.