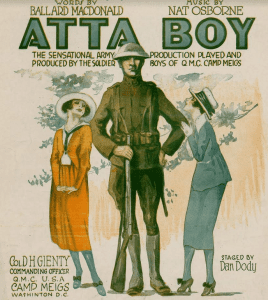 Historical researcher David Fiske is set to give a presentation “Broadway Goes to War: Soldier Shows of World War I,” about the “soldier shows” which were staged during and after the First World War, on Sunday, July 14th at 2:30 pm at the Gorham Free Library, 2664 Main Street, Gorham, NY.

Soldier shows were put on to entertain servicemen – in training camps and overseas. However, the shows also allowed theatrical producers to amuse the public. The productions featured performers who were actually in the service, and consisted of humorous skits and novelty songs, which will be revisited during the program.

Since New York City was a show business hub, many of the New York men who served had background in entertainment and made use of their talents in soldier shows. Soldiers with names familiar to Broadway theater-goers – such as Sergeant Irving Berlin, Private Harry Wagstaff Gribble, and Major Frank Tinney – pitched in to work on the shows. Proceeds from the shows went to projects intended to improve the lives of those serving in the armed forces of the U. S.

The program is free and open to the public. For more information, contact Gorham Free Library at (585) 526-6655, GorhamLibraryDirector@owwl.org, or visit their website.