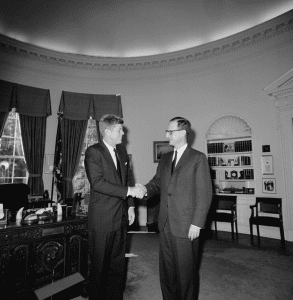 Morgenthau, grandson of Woodrow Wilson’s ambassador to the Ottoman Empire and son of FDR’s Treasury secretary, was appointed U.S. Attorney for the Southern District of New York in early 1961 by newly elected President John F. Kennedy. He would soon be asked to aim higher.

Reeling from Gov. Averell Harriman’s 1958 defeat at the hands of electoral novice Rockefeller, a Republican, New York Democrats were still searching for a gubernatorial candidate well into the summer of 1962. In mid-August, less than three months before the fall general election, state and national party leaders, including New York City Mayor Robert F. Wagner and Bronx Democratic boss Charlie Buckley, met in Washington to discuss potential candidates. Buckley and Kennedy hashed it out at the White House, and Morgenthau’s potential candidacy was publicly floated in a front-page New York Times article the next day.

Kennedy’s advisers had already been focused on this important race. New York was still the most populous state in the country (although it would soon be surpassed by California) and its governors had often become Presidential nominees – and Presidents. Rockefeller’s 573,000-vote margin of victory over Harriman, a longtime national figure, automatically made him a 1964 Presidential contender. 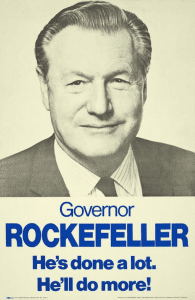 In a confidential June 1962 analysis of the upcoming New York elections now in the Kennedy Archives, the polling firm of Louis Harris and Associates opined, “The 1962 election in New York will be decisive in determining the political future of Governor Nelson Rockefeller….There are some who believe that, had he been the GOP nominee for President in 1960, he would be President today.” The 42-page report added that the fall election would be make-or-break for the 54-year-old governor. “In short, either Rockefeller must now win convincingly, or be counted out of the national running in the future.”

Rocky’s first term was not without problems. After considering a Presidential run in 1960, he backed away from entering the primaries, ceding the nomination to Vice President Richard Nixon. He unsuccessfully tried to thwart Mayor Wagner’s landslide re-election in 1961. He raised taxes. Perhaps most daunting to his national chances: his recent divorce from his wife of 31 years. No divorced person had ever won the presidency. (Additionally, Democrats’ statewide registration advantage had increased from just under 60,000 in 1958 to more than 400,000 four years later.)

In fact, Harris’s polling indicated some vulnerability: a theoretical Wagner candidacy could defeat Rockefeller by a 51%-to-49% count, the best showing among 10 potential Democratic candidates tested (with undecided responses not counted). Morgenthau, then 43 years old, performed second best among the 10, losing to Rockefeller by a 49% to 51% count.

But first Democrats had to get their act together. The state party, in “chaos and confusion” according to Times political correspondent Leo Egan, needed to unite around a candidate – particularly one with a well-known family name and a lack of controversial baggage. The clock was ticking: the Democratic state convention was due to begin Sept. 17 in Syracuse. On Sept. 4, Morgenthau resigned as U.S. attorney and declared his candidacy for governor. He said he had decided only the day before, and had phoned Wagner and his boss, U.S. Attorney General Robert F. Kennedy, that evening to inform them of his decision.

At his announcement, reporters asked whether his candidacy was his decision or had been pushed on him by party leaders. Replied Morgenthau: “I think it’s a little bit of both.”

Indeed, the Morgenthaus and Kennedys had long been family friends, and, according to Arthur Schlesinger’s 1978 biography, Robert Kennedy and His Times, Bobby Kennedy had appointed Morgenthau to his U.S. Attorney’s post in 1961 over Boss Buckley’s opposition. Schlesinger wrote that Bobby Kennedy in 1962 “thought that Morgenthau, who had rapidly proved himself a first-class public servant, might be a good candidate for governor,” and “persuaded Buckley” to back him.

Another potential nominee, Congressman Sam Stratton of Schenectady, derided Morgenthau, telling The Times, “He is completely unknown. He lacks the ability to wage a fighting campaign against Mr. Rockefeller.” Rockefeller campaign manager William L. Pfeiffer charged that Morgenthau had been chosen by “the Democratic bosses.” (Indeed, Harriman had been badly hurt in 1958 by assertions he was captive to party bosses, especially Tammany Hall leader Carmine DeSapio.) A Times “Man in the News” profile of Morgenthau described him as “a persevering sort but no backslapper,” and quoted an unnamed friend as saying, “Bob’s not the most scintillating personality I know but he’s remarkably capable and a real bird-dog on issues that interest him.”

Morgenthau won the nomination at Syracuse on the second ballot, defeating Queens District Attorney Frank D. O’Connor, with Stratton a distant third. (For Senate, Democrats nominated James B. Donovan, former general counsel of the Office of Strategic Services – predecessor to the CIA —and the man who negotiated the Feb. 10, 1962, exchange of Soviet spy Rudolf Abel for downed U.S. pilot Francis Gary Powers. Donovan was portrayed by Tom Hanks in the 2015 film, Bridge of Spies.)

In his 2014 biography of Rockefeller, On His Own Terms, historian Richard Norton Smith writes that the circumstances of Morgenthau’s nomination, and his low-key persona, left rank-and-file Democrats cold. “Morgenthau’s acceptance speech was punctuated by the sound of delegates leaving the half-empty hall… Under the merciless glare of the TV camera… Morgenthau simply came off as dull.” Smith quotes state Democratic operative William vanden Heuvel as saying, “Harriman was stiff. Morgenthau was stiffer.”

A day after Morgenthau’s anointment, Republicans re-nominated Rockefeller, who cited Democratic disunity in his acceptance speech. “It seems to me that the people of this state will find it impossible to understand why they should be asked to trust their destiny to a party still bitterly struggling to discover its own true identity.” Rockefeller then retraced his 1958 campaign, alternating between buses and his private plane to visit all 62 counties in the state – in the words of political scientist Robert H. Connery, “the quintessence of the old-time barnstormer.”

Morgenthau and other Democrats charged that Rockefeller would raise taxes again, an assertion the Governor felt compelled to repeatedly deny. Morgenthau’s attacks on Rockefeller’s economic record fell flat, as the state unemployment had declined sharply since 1958, and Rockefeller’s campaign began issuing a “Morgenthau Mistake of the Day” press release. Kennedy campaigned with Morgenthau in mid-October while former President Dwight D. Eisenhower appeared with Rockefeller a few weeks later.

With the election three weeks away, rumors began percolating that the Soviet Union had placed missiles in Cuba. According to Smith’s biography, Rockefeller was set to issue a statement harshly critical of JFK, but longtime adviser Bill Ronan convinced him to instead halt his campaign and convene the New York State Defense Council. A few days later, Rockefeller, now publicly supportive of the President, was among 10 governors who met with Kennedy at the White House. After the Soviets agreed to remove the missiles, Kennedy’s popularity soared (the crisis blunted former VP Nixon’s momentum against Democratic incumbent Gov. Pat Brown; Brown, like Rockefeller, played the role of responsible incumbent and attended the governors’ White House meeting).

Two days before the election, Rockefeller and Morgenthau clashed in a televised debate, with the challenger asserting that state job growth had underperformed the national average, and the incumbent insisting that the state unemployment rate was better than the national average. But the die was cast, with the Times’ front-page election preview pegging Rockefeller as the heavy favorite, and noting that Morgenthau had made as a central tenet of his campaign “an appeal to Democrats to eliminate Mr. Rockefeller as a potential rival to President Kennedy in 1964.” So, in the end, it came down to the size of Rockefeller’s margin and what that indicated about Rocky’s potential strength as a presidential candidate. Republicans hoped for an 800,000- to 1 million-vote edge.

In that light, the final result was less than satisfying for Rockefeller, who defeated Morgenthau by 529,000 votes, a margin 8% narrower four years earlier. Morgenthau tallied a total of 2.55 million votes on the Democratic and Liberal party lines, only 1,500 fewer than Harriman had received. Rockefeller received 45,000 fewer votes than he had in ’58, his total held down in part by votes cast for a tax-averse Conservative Party nominee. As The Times’ Leo Egan wrote the day after, “His percentage of the vote against a man considered a weak candidate was nearly the same as his percentage against a stronger candidate four years ago.”

Two weeks after the 1962 election, President Kennedy quickly reappointed Morgenthau as U.S. Attorney. He would retain the post until January 1970. He then briefly served as a deputy mayor under John Lindsay before resigning for a second try at the statehouse. Citing a lack of campaign finances, Morgenthau ended his second gubernatorial run ended six weeks later when the Liberal Party declined to nominate him. He became Manhattan D.A. in 1975, serving for a record 35 years.