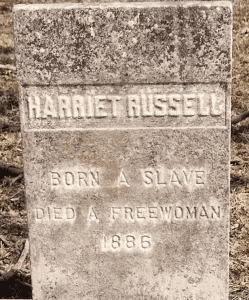 Harriet Sims was born a slave in 1806 on a plantation called The Hive, near Hagerstown, Maryland. Her owner was Colonel William Frisby Fitzhugh and later his daughter Ann, who married the philanthropist and abolitionist Gerrit Smith of Peterboro NY. In 1841, Ann Fitzhugh Smith, who became “schooled” in abolition, wanted to find Harriet and set her free. The Smiths arranged with Rev. James Canning Fuller of Skaneateles to find Harriet, free her from slavery, and bring her to Peterboro. Burdick will share maps, new images, and family charts to highlight the story of Harriet and her descendants, some of whom will be present at the program. The next day, Sunday, August 4 at 12:30 pm, Burdick will host a gravestone installation at the Upper Lisle Cemetery for Harriet Russell’s daughter Emily. Descendants of Harriet have arranged for the installation and will be at the ceremony.

Donna Burdick is a native of the hamlet of Peterboro in the Town of Smithfield, Madison County, New York. She became interested in her hometown’s history when, as a young girl, her grandmother gave her five Peterboro postcards. This has led to a total of more than 100 postcards and six scrapbooks, indexed by subject! She has been Smithfield Town Historian since 1995 and in this capacity, has researched and written on many topics, including spiritualism in the Peterboro vicinity; the Home for Destitute Children of Madison County; the African American students of Gerrit Smith’s manual labor school; and nine volumes of Snipets – From the Hills of Smithfield, 1995-2009, containing articles on Gerrit Smith and his extended family and other local settlers, to name just a few. Her collection of more than 250 family folders is located at the Peterboro Area Historical Society, of which she is a charter member. Donna is also a lifetime member of the National Abolition Hall of Fame and Museum at Peterboro, is a Registered Historian in New York State, and was the primary researcher for the Madison County Freedom Trail Commissioner.

Descendants of freedom seekers from slavery, and the public, will congregate for the tenth year in this 21 st C. to commemorate the 19th Century emancipation in the ways that the generation before celebrated in the 20th Century. Reception and registration will open at 9:30 am, followed by the morning assembly at 10 am at the Gerrit Smith Estate National Historic Landmark, 5304 Oxbow Road, Peterboro. Folks then either walk or ride in the processional to the Peterboro Cemetery to lay a wreath at a gravestone which reads “Born a slave. Died a free (wo)man,” and one also at the humble grave of the wealthy abolitionist Gerrit Smith.

The public is encouraged to attend all or part of the Emancipation Day programs. Admission is a donation. For more information, call (315) 280-8828, or email info@gerritsmith.org.