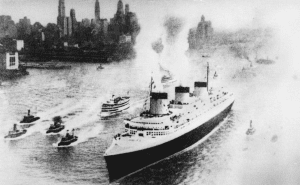 Paris-based documentary director Tal Zana is seeking amateur photographs and films that show the liner Normandie in the New York City harbor between 1935 and 1942.

The Normandie was a popular sight at the time, so it is probable it was photographed by New-Yorkers and tourists who had the proper equipment. For this documentary, the filmmaking team is especially interested in showing photographs and films that haven’t been seen by the general public before.

Of special interest are the pictures of the fire that destroyed the ship in the New York City harbor on February 9, 1942, and that was visible from most of Manhattan, by day and night — but all other footage of the ship is also welcome.

The project is a documentary about the history of the Normandie, and will be first broadcast on French public television. It’s being produced by Talweg.