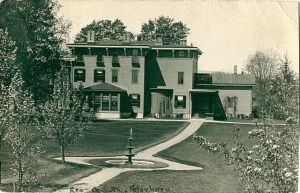 A gravestone for Emily Russell Hill is set to be installed at the Upper Lisle Cemetery, Route 26, in the Town of Triangle, Broome County on Sunday, August 4th, at 12:30 pm. Emily Russell was born enslaved in 1828 in Kentucky, the daughter of Samuel and Harriet (Sims) Russell.

In 1841 the Russells had five children and were the property of at least their third owner, Samuel Worthington of Washington County, Mississippi. Through the efforts of abolitionist Gerrit Smith and his wife Ann of Peterboro, Town of Smithfield, Madison County, New York, the family was freed at a cost of $3,500.

While most of the Russells settled in Central New York, Emily and her husband Moses Hill came to the Town of Triangle before 1892. There they joined their only child Mary, who was the wife of George Waverly, a farmer at Upper Lisle. For many years, Emily worked as a housekeeper for Mary Newcomb of Whitney Point.

Mary Newcomb’s father George Seymour was a stationmaster on the Underground Railroad at his home on Collins Street. When Emily died in 1922, she was survived by her daughter Mary and grandsons Gerrit and Richard Waverly. These two men were named for Emily’s brothers who served during the Civil War in Company B, 8th Regiment, United States Colored Troops.

The placement of Emily Russell Hill’s marker is the last of the gravestones to be installed for the eight family members whose freedom was purchased in 1841. This includes William Sims, the father of Harriet Russell who was freed in 1841 and brought to Peterboro to be reunited with the rest of his family. The graves are in the Peterboro Cemetery.

Donna Dorrance Burdick, the Town of Smithfield historian, has, for years, been researching the families of African-Americans who fled from slavery and found a haven in the hamlet of Peterboro which is in the Town of Smithfield. Based on Burdick’s research, Peterboro Emancipation Day was launched ten years ago to commemorate emancipation as the generations before did.

Photo of Gerrit and Ann Smiths home in Peterboro provided.