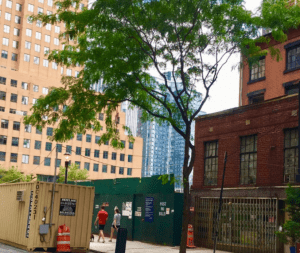 Before and during the American Civil War, probably between 1851 and 1863, 227 Duffield Street in downtown Brooklyn was the home of prominent abolitionists Thomas and Harriet Truesdell. The block is officially known as Abolitionist Place.

Harriet was on the organizing committee of the 1838 Anti-Slavery Convention of American Women. Thomas was a founding member of the Rhode Island Anti-Slavery Society. They were colleagues and friends of well-known abolitionists Lewis Tappan and William Lloyd Garrison. Historians and community activists believe the Truesdell home was probably a stop on the Underground Railroad where freedom seekers escaping from slavery sojourned in relative safety during their trip further north or to Canada, but they have been unable to come up with documented proof. Now the building faces imminent demolition unless enough public support is generated to preserve it.

In June 2019, the New York City Buildings Department received an application by the buildings current owner for demolition. In response, the Circle for Justice Innovations launched a Change.org petition drive urging the city Landmarks Preservation Commission to designate the building as an official landmark so it cannot be torn down.

The petition describes 227 Duffield as “the last known standing historic site in Brooklyn where well-known Abolitionists lived and where people found freedom through the Underground Railroad.” The Landmarks Preservation Commission is currently evaluating the building for landmark status.

Local elected officials including Assemblywoman Jo Anne Simon, Councilman Stephen Levin, and Congresswoman Nydia Velasquez are allied with groups trying to save the building. Brooklyn activists hope to turn it into a museum celebrating the borough’s African American heritage.

Photo of 227 Duffield Street, on the right, courtesy Brooklyn Eagle.