On June 17, 1909 the Broadalbin Herald newspaper reported on a canal boat that sunk in Fort Hunter that was loaded with 240 tons of salt. The barge, George Bleistein had been hauling the salt in a “double header” (both barges being towed together) along with the Col. J.H. Horton. Both barges were from Buffalo and captained by George H. Ray of Port Byron. The George Bleistein sank ON the Schoharie Creek Aqueduct.

Reportedly, a steam pump and diver were required to raise the boat and the cargo was thought to be a total loss. The bags of salt were consigned to The International Salt Company of New York, which continues today in Clarks Summit, Pennsylvania.

The International Salt Company was founded in 1901 and by 1934 it held several smaller salt companies and mines as subsidiaries. Throughout the twentieth century it bought and sold several salt mines around the Great Lakes, particularly around Detroit, Michigan. The salt mined from them has primarily been used for de-icing of roads, making its connection to the Motor-City that much more interesting. The International Salt Company still sells products to the public though it now operates as a subsidiary of K + S Chile S.A. Their principle focus is still on winter weather products and Bloomberg News states that the company continues to provide “deicing salt products that include Blizzard Wizard ice melt, a blended ice-melt formulation for use by snow-fighting professionals for melting ice and snow.” 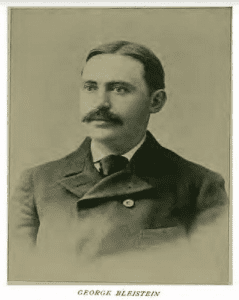 The Col. J.H. Horton, which avoided being wrecked on the Aqueduct that June day in 1909, was named after Joseph H. Horton of Buffalo, who served as a Lieutenant Colonel in the 141st Pennsylvania Infantry during the Civil War. In 1900 he had business as well as political interests in Michigan and Pennsylvania coal as well as various other enterprises such as the Buffalo based Wright Taper Bearing Company. His work with the Lehigh Valley Coal Company put him into connection with the Lehigh Valley Railroad.

As an active member of the social and political organizations of Civil War veterans, the Grand Army of the Republic (G.A.R) and the Society of the Army of the Potomac, his network was wide. During one particular G.A.R. Encampment Fundraiser he offered a free ton of coal to the highest seller of tickets and in 1896 he offered the same to any family who had a child younger than two years old who could most clearly pronounce Lehigh Valley Coal Company during the Tompkins County Fair Baby Contest. He was also a speculator in Alaskan gold, investing in and serving as president of the New York Metal and Reduction Company during the Nome gold-rush in 1902. 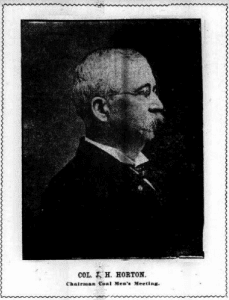 The canal barge was not the only vessel named for the Colonel. A steamer out of Ithaca that provided passenger runs on Cayuga Lake was named for him and provided service for many years prior to its fiery end in April of 1925. The Jamestown Evening Journal reported the fire burned the vessel to the waterline.

A locomotive was also named in the honor of Horton. The South Bethlehem Star ran an article stating that “A locomotive notable for its high degree of ornamentation has just been placed on the Geneva and Sayre branch of the Lehigh Valley railroad. It has been numbered 526 and named Col. J. H. Horton. The engineer’s cab is constructed in Queen Anne style, with stained glass windows. The cozy interior is decorated with French clocks and steel engravings, one of the latter being a portrait of Col. Horton. The metal work is nickel-plated. On the outside of the cab is the name of Col. Horton and another portrait. There is an abundance of external brass work and nickel plate. The locomotive is the pride of the road.”

George Bleistein and Col. J.H. Horton may have had business connections in the Buffalo area. Col. Horton served as chairperson for a meeting of coal “barons” who convened at the Pan-American Exposition in June of 1901. George Bleistein was on the Expo’s board of directors. “CARBON PURVEYORS MEET AND GLADLY GREET FROM ALL THE LAND” was the headline in The Buffalo Courier newspaper.

The boat that sank on the Aqueduct was named for George Bleistein, who was born in Buffalo in 1861.  He was the son of German immigrants and spent two years at a German parochial school before graduating from Public School No. 15. When he was fourteen, Bleistein was hired as an office boy in the establishment of the Buffalo Courier Company. He eventually rose through the ranks to become company president in 1884 upon the death of Charles W. McClune. Bleistein married McClune’s widow. The Courier Printing Company was the official printer for Buffalo Bill’s Wild West Show during the 1890s and published a leading Democratic newspaper in the City of Buffalo. As publisher, Bleistein was faced several times with suits of libel as well as injury damages – such as the case against him from Dr. Sargent who fell over a pile of lead on the sidewalk in front of the Courier Company building in 1899. Sargent was awarded $700 in that case.

His most notable court case may be one at the Supreme Court of the United States. The Wallace Circus had employed the services of the Courier Company to create and print advertisements for their acts. Upon distributing their supply, the circus hired the Donaldson Lithography Co. to print new sheets using the same exact images; those created and printed by Courier. In Bleistein v. Donaldson Lithographing Co., 188 U.S. 239 (1903), (an opinion written by Chief Justice Oliver Wendell Holmes), the court held that copyright law could include advertisements.

Bleistein invested and held board positions in several other companies, and was politically active. He was elected president of the Home Rule Democracy of Erie County in 1893 and was a trustee of the City and County Hall for seven years. He served as chairman of that board for four years and during that time faced some volatile political movements within the state.

He was a Freemason, a member of the Buffalo, Country and Saturn Clubs of Buffalo, the Manhattan Club of New York, and the elite Jekyl Island Club off the coast of Georgia. He also served as president of the New York State Associated Press and a director of the United Press. Bleistein remained a prominent business and social figure in Buffalo, which led to his serving on the board of directors for the Pan-American Exposition in 1901.

And yes, that expo! where President William McKinley was assassinated by anarchist Leon Czolgosz in September 1901 (several months after the coal barons meeting). Bleistein was appointed as a U.S. Customs Collector for the Port of Buffalo from 1914 until his death from a stroke at his desk in the Buffalo Federal Building in 1918.

Bleistein had also been a sporting man. He gave New York Governor Theodore Roosevelt a notably well-embellished saddle and was a charter member of the Erie County Conservation Society. One of their first efforts was restocking pheasant and quail in the Genesee Valley in the late 1890s – they had suffered from decades of overhunting.

As president of the Buffalo Kennel Club, George Bleistein won awards for the breeding and training of pointer dogs from the Pointer Club of America. His wife was also heavily involved in the creation of the Green Lake Camp for the Girl Scouts of America in 1930.

The canal barge George Bleistein was afloat as early as August, 1899, when it was reported in the Buffalo Review that the barge, loaded with four tons of wheat, had reached Albany. 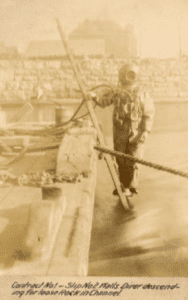 
The Amsterdam Evening Recorder reported that the boat was raised late on that Friday evening by use of a steam pump and moved to the south side of the Aqueduct to allow other barges to pass. New York State Canal Diver Henry Crane, gave the opinion that a leak in the hull allowed water to mix with the cargo and thus made the vessel too heavy to stay buoyant. Captain Ray had the Col. J.H. Horton moved to the west of the Aqueduct and moored to await the repair and reloading of the George Bleistein. Both were anticipated to be set on course to New York City again, and the agent in charge of the original salt cargo was to attempt sale of any redeemable portion of it.

Henry Crane worked professionally as a diver for over 30 years and by the 1922 drowning of a young woman in Cobleskill, he had reportedly recovered over three hundred bodies. Drownings and repairs were not his only source of work, as he also recovered lost cargo such as copper bars and beer. The Erie Canal required constant maintenance work. Crane repaired leaks in barges under water and also conducted surveys of canal structures.

As an appointed canal employee, the New York State Assembly put Crane’s monthly wages at $41.59 in 1909. By 1911, a newspaper from his home city of Schenectady reported his wages at $75.00 per month. By 1927, Crane’s son Henry had become his assistant.