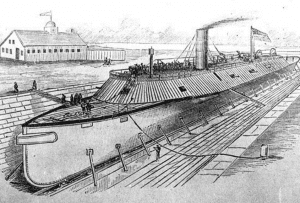 As the Civil War raged on the land, the two national navies — Union and Confederate — created another war on the water. The naval war was one of sudden, spectacular battles as well as continual and fatal vigilance on the coasts, rivers, and seas.

US Navy veteran and US Navy Civil War sailor re-enactor John Dellapenna, along with other men who portray United States soldiers and sailors from the Civil War era, are set to host a re-enactment of “A Day in the Life of a Sailor,” on Saturday July 27th from 10 am to 4 pm at the Sackets Harbor Battlefield State Historic Site.

Dellapenna is part of Ships Company, a Civil War navy re-enactment group who serve on board the 1855 sloop-of-war USS Constellation in Baltimore’s inner-harbor. From spring to autumn their re-enactors gather to present “A Day in the Life of a Sailor.”